Edward Patrick Francis Eagan (April 26, 1897 – June 14, 1967) was an American boxer and bobsledder who is notable as being the only person to win a gold medal at both the Summer and Winter Olympic Games in different disciplines. Eagan won his summer gold in boxing and his winter gold in four-man bobsled. Finally, Eagan is one of the few athletes who have competed in both the Summer and Winter Olympic games. 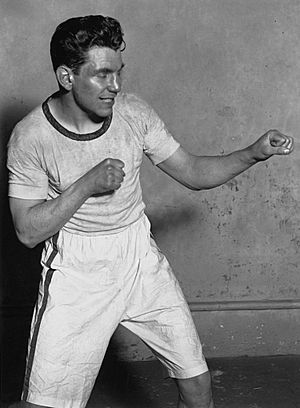 Eagan returned to the Olympics eight years later, this time as a member of the bobsleigh crew of Billy Fiske, who steered to victory at the 1932 Winter Olympics in Lake Placid. Eagan became the first of five Olympians to medal in both Winter and Summer Games, followed by Jacob Tullin Thams (Norway), Christa Luding-Rothenburger (East Germany), Clara Hughes (Canada), and Lauryn Williams (United States). Eagan is one of two competitors to win gold in both Olympic seasons (the other being Gillis Grafström whose only summer gold was in figure skating). 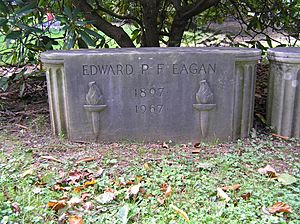 Eagan graduated Yale in 1921, then studied law at Harvard University and later at the University of Oxford, graduating with a Bachelor of Arts degree from Oxford in 1928. In 1932, he was admitted to the U.S. Bar.

During World War II, he fought with U.S. Army on many fronts, reaching the rank of Colonel and earning numerous decorations.

Eddie Eagan set a world record for the fastest circumnavigation of the globe by scheduled airlines on December 13th, 1948. He traveled 20,559 miles stopping at 18 different stations and beat the previous record by 20 hours and 15 minutes.

Eddie Eagan was a guest on the television show "I've Got A Secret" as one of five former Olympic champions which aired October 13, 1954.

He died at age 70 in New York City and was interred at Greenwood Union Cemetery.

All content from Kiddle encyclopedia articles (including the article images and facts) can be freely used under Attribution-ShareAlike license, unless stated otherwise. Cite this article:
Eddie Eagan Facts for Kids. Kiddle Encyclopedia.