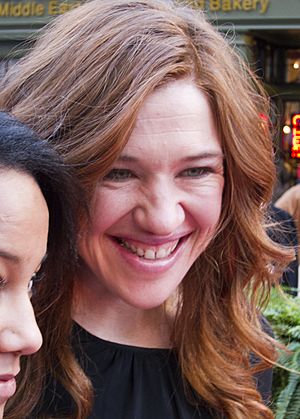 Clara Hughes, OC OM MSC  was born on September 27, 1972 in Winnipeg, Manitoba, Canada. She is a Canadian cyclist and speed skater who has won more than one Olympic medals in both sports. She won two bronze in the 1996 Summer Olympics and four medals (one gold, one silver, two bronze) over the course of three Winter Olympics. She is tied as the Canadian with the most Olympic medals.

Hughes is one of the few athletes who have competed in both the Summer and Winter Olympic games. Hughes is the only person ever to have won multiple medals in the winter and summer olympics. Hughes is also the only Canadian to have won medals in both the Summer and Winter Olympics. Hughes was the first Canadian woman to win a medal in road cycling at the Olympics, winning two in the 1996 Atlanta Olympics.

Hughes was named to both the Order of Manitoba and as an Officer of the Order of Canada because of her work in sports and for the help she had given to others. She works with Right to Play, a sports program that helps youth all over the world. After winning her gold medal in 2006, she donated $10,000 to Right to Play.

Throughout her career Hughes received a number of other awards, and trophies. She was named Female Athlete of the Year by Speed Skating Canada in 2004 for long track. In 2006 she received a Sport and Community Trophy. She was then named to the 2006 List of Most Influential Women in Sport and Physical Activity. In the summer of the year 2010, she would receive a star on the Canadian Walk of Fame and on November 15, 2010, she was put into Canada's Sports Hall of Fame.

She works for the Bell Let's Talk Mental Health program, including Bell Let's Talk Day. Hughes uses her past problems with depression to help others. "Hughes battled deep depression, which [almost ruined] her life, after winning two bronze medals in cycling at the 1996 Olympics." Since 2013, Hughes has started yearly bike rides across Canada in order to talk about mental health. In 2015, a CTV-produced documentary Clara's Big Ride premiered on the fifth annual Bell Let's Talk Day. Her memoir, Open Heart, Open Mind, was published in 2015.

All content from Kiddle encyclopedia articles (including the article images and facts) can be freely used under Attribution-ShareAlike license, unless stated otherwise. Cite this article:
Clara Hughes Facts for Kids. Kiddle Encyclopedia.