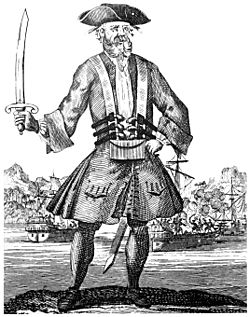 Edward Teach, originally from an engraving by Benjamin Cole in A General History of the Robberies and Murders of the Most Notorious Pirates (1724)

Edward Teach (c. 1680 – 22 November 1718) was a pirate, often called "Blackbeard the Pirate". (It is not clear what his real name actually was; some historians think that his last name may really have been Thatch.) He attacked ships in the Caribbean and the American colonies. His flagship ship was the captured French slave ship La Concorde which Blackbeard renamed Queen Anne's Revenge. About 1718 it ran aground near Beaufort Inlet, North Carolina and was abandoned.

Blackbeard often fought wearing a big feathered tricorn hat, and with lots of swords, knives, and pistols. Some pictures show him with lighted rope matches woven into his enormous black beard during battle. The matches burned slowly and gave of lots of smoke. They were designed to make him look frightening. He probably got the idea from seeing the burning rope was used to light the gunpowder in cannons and guns. (These old fashioned guns were called matchlocks, later a flint was used to make a spark, these were called flintlock guns). No one knows how many wives Blackbeard had. The book A General History of the Pyrates says that he had as many as fourteen wives, but he was not legally married to most of them.

Blackbeard is thought to have been born in Bristol. Teach went to sea when he was very young. He served on an English ship in the War of the Spanish Succession, privateering in the Spanish West Indies and along the Spanish Main. At the war's end in 1713, Teach, like many other privateers, turned to piracy.

Teach began as a pirate under Benjamin Hornigold. In 1716, Hornigold retired, taking advantage of an amnesty offered to former privateers by the British government. Teach then took command of his own ship.

During the next two years Blackbeard attacked merchant ships, forcing them to allow his crew to board their ship. The pirates would seize all of the valuables, food, liquor, and weapons. Ironically, despite his ferocious reputation, there are no verified accounts of him actually killing anyone.

The Lieutenant-Governor of Virginia, Alexander Spotswood sent two ships after Blackbeard. On 18 November 1718, Lt. Robert Maynard sailed from Hampton, Virginia to Ocracoke Inlet, North Carolina. On 22 November 1718, Maynard and his men defeated Blackbeard and the pirates.

Teach died fighting and was decapitated. Legends about his death immediately sprang up. His headless body, was thrown overboard, but swam three times around the ship before sinking. Teach's head was placed as a trophy on the bowsprit of the ship. Captain Maynard had to keep the head to claim his prize when he returned home. Later, Teach's head hung from a pike in Bath, Somerset.

All content from Kiddle encyclopedia articles (including the article images and facts) can be freely used under Attribution-ShareAlike license, unless stated otherwise. Cite this article:
Blackbeard Facts for Kids. Kiddle Encyclopedia.