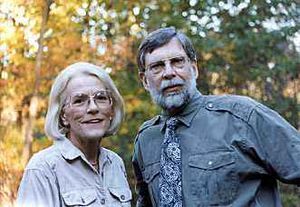 Edwin Frederick Kagin, J.D. (November 26, 1940 – March 27, 2014) was an American lawyer. He was a founder of Camp Quest which was the first secular summer camp in the United States for the children of secularists, atheists, agnostics, brights, skeptics, naturalists and freethinkers. He was also the National Legal Director of American Atheists from 2006 until his death in 2014. He was born in Greenville, South Carolina.

All content from Kiddle encyclopedia articles (including the article images and facts) can be freely used under Attribution-ShareAlike license, unless stated otherwise. Cite this article:
Edwin Kagin Facts for Kids. Kiddle Encyclopedia.