Kids Encyclopedia Facts
Not to be confused with a tidal island in Loch Portree, Isle of Skye,or the island (on the river Snizort, also in Skye) upon which stands the ruin of Snizort Cathedral, or the poetic name for Iona.

It lies off the east coast of Lewis at the mouth of Loch Erisort. At low tide Eilean Chaluim Chille is connected by a causeway to the mainland of Lewis at Crobeag.

At the southern end of the island lie the ruins of St Columba's Church. This was once an important centre of religion, being cited in a report of 1549 as the main place of worship for the parish of Lochs. There was probably a church there from about 800 AD, built by St Columba's followers. St Columba died on the Inner Hebridean island of Iona in 597 AD. The cemetery was in use until 1878. Eilean Chaluim Chille is protected by Historic Scotland as an ancient monument. 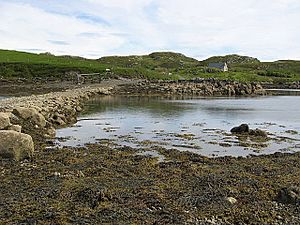 All content from Kiddle encyclopedia articles (including the article images and facts) can be freely used under Attribution-ShareAlike license, unless stated otherwise. Cite this article:
Eilean Chaluim Chille Facts for Kids. Kiddle Encyclopedia.