Gasimov took part in the Azerbaijani national selection, Milli Seçim Turu 2011. Gasımov's first appearance was in Heat 6, placing second with 10 points, behind winner Ilgara Ibrahimova with 12 points with both qualifying to the semi-final. Gasimov qualified from the semi-final along with four other artists to the final on 11 February 2011, where he and Nigar Jamal won the right to represent Azerbaijan at the Eurovision Song Contest 2011 in Düsseldorf, Germany in May 2011. They sang under the pseudonym Ell & Nikki the song "Running Scared" written by Stefan Örn and Sandra Bjurman from Sweden and Iain Farquharson from the UK, which won the competition with 221 points. 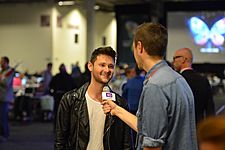 After winning the Eurovision Song Contest 2011 Gasimov and Jamal got to travel to a number of countries and perform their winning entry. In Azerbaijan 15,000 postage stamps in the denomination of 1 Azerbaijani manat were printed. The production of postage stamps in Azerbaijan were in dedication of Eldar and Nigar's victory at 2011 contest. In 2012, Eldar Gasimov was among five musicians from Azerbaijan chosen as the jury in the Danish national selection of the 2012 Eurovision contestant.

In January 2012, he released his first post-Eurovision song called "Birlikda nahayat" ("At last together"). Gasimov was one of the hosts of the Eurovision Song Contest 2012 held in Baku, Azerbaijan after his win the year before.

On 17 July 2012, Gasimov released the acoustic version of his new single I'm Free. The official video was released in September 2012. The original version of the track had been featured with famous Azerbaijani DJ/producer ALIGEE. The track had been produced in a studio of AzeriLife Music Entertainment by the executive record and music producer Farid (a.k.a. Phareed) Mammadov and Ali (a.k.a. ALIGEE) Abasbeili.

In October 2012, Eldar Gasimov announced on his social network account that he had been hired by the Baku Slavic University, where he had received his master's degree, to teach a course in international relations.

All content from Kiddle encyclopedia articles (including the article images and facts) can be freely used under Attribution-ShareAlike license, unless stated otherwise. Cite this article:
Eldar Gasimov Facts for Kids. Kiddle Encyclopedia.