The European and Pacific theaters are highlighted in multiple displays throughout the museum.

Highlights are a submarine display with an authentic World War II periscope, and the "Tank Mountain" interactive display in which visitors can operate remote-controlled tanks on mountainous terrain.

Visitors can enter a life-sized European command post equipped with period communications equipment. Throughout the museum dioramas bring the conflict to life for visitors. A section on the Eastern Front details the conflict between Russia and Germany that would become the largest front of the war.

Thousands of other items are on display, constantly being rotated. These include weaponry, uniforms, field gear and video. 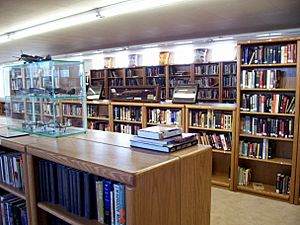 The Eldred World War II museum is home to over 10,000 volumes of books, magazines, newspapers, memoirs and other items, one of the largest World War II collections in the United States. Visitors are welcomed to these resources, but no item can leave museum grounds. The library is broken into categories, some of which are "European Theater of Operation", "Pacific Theater of Operation", "Aviation", "Espionage", "Atlases and Maps", "Reference", "Business and Industry", "Biographies and Autobiographies" and "Russian Book Collection". 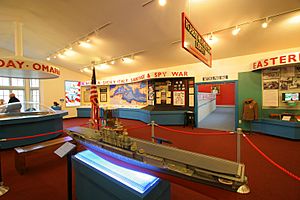 The Gallery of Valor was unveiled November 11, 2006. The displays take visitors through six areas: Training, Shipping and Transportation, U.S. Navy in Action, North Africa-Sicily-Italy, Sabotage and Spy War and the Eastern Front.A diorama depicting Omaha Beach sits in the center of the Gallery of Valor. Also present is a weapons display featuring a training rifle, M1 carbine, M1 Garand and a Colt .45 pistol. 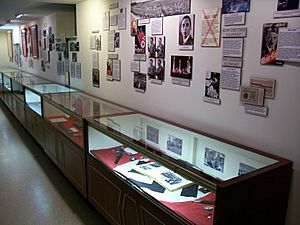 The Lower Level of the museum features exhibits utilizing war-time artifacts. Categories include World War I (Prelude to World War II), the Rise of the Nazis, Pearl Harbor, the Home Front, the Soviet-German War and a Diorama of Kursk, the largest armored battle of the war. Some artifacts on display in the Lower Level are a German Sturmgewehr 44, the precursor to the modern assault rifle, a Russian uniform and decorations, a Civil Defense helmet and brochures, rations and various other items.

All content from Kiddle encyclopedia articles (including the article images and facts) can be freely used under Attribution-ShareAlike license, unless stated otherwise. Cite this article:
Eldred World War II Museum Facts for Kids. Kiddle Encyclopedia.