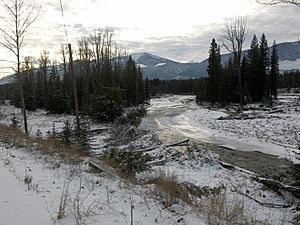 Elk River from the Elk Valley

The Elk Valley is a valley in the southeastern Kootenay region of the Canadian province of British Columbia that runs via the basin of the Elk River from the southeastern Alberta border near Kananaskis to the Rocky Mountain Trench. Communities in the valley, from uppermost to lowermost, are Elkford, Sparwood, Hosmer, Fernie, Morrissey, and Elko.

Wedged into the heart of the Canadian Rockies, the Elk Valley is approximately 60 kilometres from the Alberta and Montana borders.

The valley played an important part in the coal mining history of British Columbia for over 100 years, and was a hotbed of labour activism, regularly returning socialist independents to the legislature. The Elk Valley is the largest producing coal field in the province, producing millions of tons of coal that is shipped to steel mills around the world. All operating coal mines in the Elk Valley are now owned by Teck Resources.

All content from Kiddle encyclopedia articles (including the article images and facts) can be freely used under Attribution-ShareAlike license, unless stated otherwise. Cite this article:
Elk Valley (British Columbia) Facts for Kids. Kiddle Encyclopedia.