Else Lasker-Schüler facts for kids

Else Lasker-Schüler (née Elisabeth Schüler) ( 11 February 1869 – 22 January 1945) was a German-Jewish poet and playwright famous for her bohemian lifestyle in Berlin and her unique poetic genius. She was one of the few women affiliated with the Expressionist movement. Lasker-Schüler fled Nazi Germany and lived out the rest of her life in Jerusalem.

Schüler was born in Elberfeld, now a district of Wuppertal. Her mother, Jeannette Schüler (née Kissing) was a central figure in her poetry; the main character of her play Die Wupper was inspired by her father, Aaron Schüler, a Jewish banker. Her brother Paul died when she was 13.

Else was considered a child prodigy because she could read and write at the age of four. From 1880 she attended the Lyceum West an der Aue. After dropping out of school, she received private lessons at her parents' home.

In 1894, Else married the physician and occasional chess player Jonathan Berthold Lasker (the elder brother of Emanuel Lasker, a World Chess Champion) and moved with him to Berlin, where she trained as an artist. On 27 July 1890 her mother died, her father followed 7 years later. On 24 August 1899, her son Paul was born and her first poems were published. She published her first full volume of poetry, Styx, three years later, in 1902. On 11 April 1903, she and Berthold Lasker divorced and on 30 November, she married Georg Lewin, artist, and founder of the Expressionist magazine Der Sturm. His pseudonym, Herwarth Walden, was her invention. 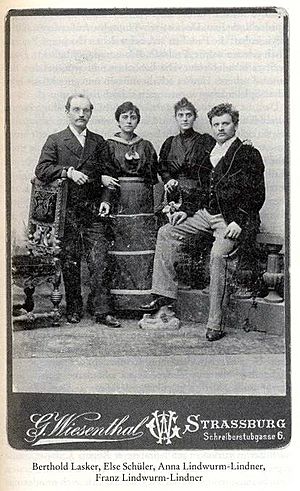 Lasker-Schüler's first prose work, Das Peter-Hille-Buch, was published in 1906, after the death of Hille, one of her closest friends. In 1907, she published the prose collection Die Nächte der Tino von Bagdad, followed by the play Die Wupper in 1909, which was not performed until later. A volume of poetry called Meine Wunder, published in 1911, established Lasker-Schüler as the leading female representative of German expressionism.

After separating from Herwarth Walden in 1910 and divorcing him in 1912, she found herself penniless and dependent on the financial support of her friends, in particular Karl Kraus. In 1912, she met Gottfried Benn. An intense friendship developed between them which found its literary outlet in a large number of love poems dedicated to him.

In 1927 the death of her son sent her into a deep depression.

Despite winning the Kleist Prize in 1932, as a Jew she was physically harassed and threatened by the Nazis, She emigrated to Zürich but there, too, she could not work and subsequently went to the Holy Land in 1934, and finally settled in Jerusalem in 1937. In 1938 she was stripped of her German citizenship and the outbreak of World War II prevented any return to Europe.

According to her first Hebrew translator, Yehuda Amihai, she lived a life of poverty and the children in the neighborhood mocked her for her eccentric dress and behavior. 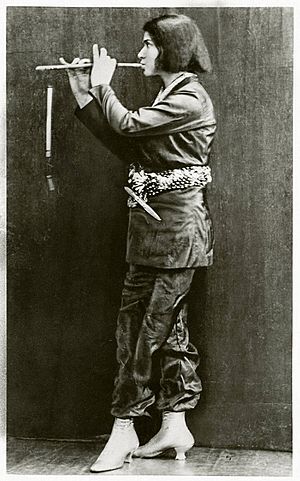 She formed a literary salon called “Kraal,” which Martin Buber, the philosopher, opened on 10 January 1942, at the French Cultural Center.”

Some leading Jewish writers and promising poets attended her literary programs, but Lasker-Schüler was eventually banned from giving readings and lectures because they were held in German. She begged the head of the German synagogue in Jerusalem to let her use his Gotteshaus (house of God) one more time:

“Wherever I was, German is not allowed to be spoken. I want to arrange the last Kraal evening for a poet who is already broken, to recite from his translations [into German] of a great Hebrew” (Letter to Rabbi Kurt Wilhelm, Else Lasker-Schüler Archive, Jerusalem, cited in Bauschinger, p. 270).

In her final years, Lasker-Schüler worked on her drama IchundIch (IandI), which remained a fragment. However, she finished her volume of poems, Mein Blaues Klavier (1943, My Blue Piano), printed in a limited edition of 330 copies.

“[H]er literary farewell became her last attempt to overcome loneliness. Significantly, she dedicated the work to “my unforgettable friends in the cities of Germany and to those, like me, exiled and dispersed throughout the world, in good faith.” In one of her final acts, she asked that her hometown of Wuppertal and its surrounding area be spared from Allied bombing."

She tended to spend whatever money she had all at once which made her go for days without food or shelter. Heinz Gerling and the poet Manfred Schturmann came to her aid. Gerling opened a bank account for her and arranged for regular payments to cover her expenses whereas Schturmann edited her work and helped with her dealings with publishers. After her death Schturmann became the trustee of her legacy and during the 1950s and 1960s dealt extensively with publishers in East and West Germany, Switzerland and Austria who wished to publish her works.

In 1944 Lasker-Schüler's health deteriorated. She suffered a heart attack on 16 January, and died in Jerusalem on 22 January 1945. She was buried on the Mount of Olives. 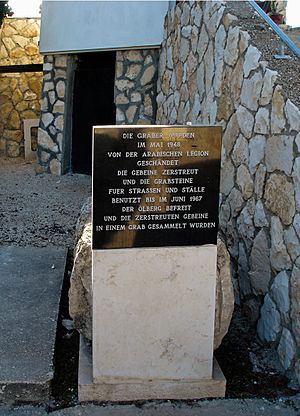 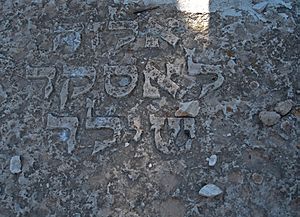 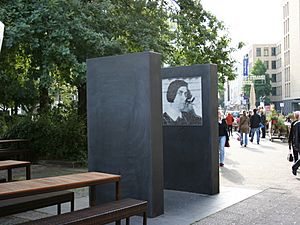 Lasker-Schüler left behind several volumes of poetry and three plays, as well as many short stories, essays and letters. During her lifetime, her poems were published in various magazines, among them the journal Der Sturm edited by her second husband, and Karl Kraus' literary journal Die Fackel. She also published many anthologies of poetry, some of which she illustrated herself. Examples are:

Lasker-Schüler wrote her first and most important play, Die Wupper [de], in 1908. It was published in 1909 and the first performance took place on 27 April 1919 at the Deutsches Theater in Berlin.

A large part of her work is composed of love poetry, but there are also deeply religious poems and prayers. Transitions between the two are often quite fluid. Her later work is particularly rich in biblical and oriental motifs. Lasker-Schüler was very free with regard to the external rules of poetic form, however her works thereby achieve a greater inner concentration. She was also not averse to linguistic neologisms.

A good example of her poetic art is her 1910 poem "Ein alter Tibetteppich" [de] (lit. "An old Tibetan rug"), which was reprinted many times after its first publication in Der Sturm, the first of these being in Fackel.

The 20th-century Scottish poet Hugh MacDiarmid included a translation of an extract from Lasker-Schüler's work in his long poem A Drunk Man Looks at the Thistle, 1926. (Lines 401–410.) German composer Margarete Schweikert set at least one of Lasker-Schuler's poems to music. 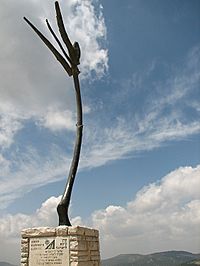 Angel for Jerusalem, Else Lasker-Schüler Memorial in Jerusalem Forest, April 2007

There is a memorial plaque to Else Lasker-Schüler at Motzstraße 7, Berlin-Schöneberg, where she lived from 1924 to 1933. Part of this street was renamed Else-Lasker-Schüler-Straße in 1996. In Elberfeld in Wuppertal there is now a school named after her (The "School without Racism"), and a memorial stele was erected on Herzogstraße, Wuppertal.

The Else-Lasker-Schüler-Society was founded 1990 in Wuppertal by journalist Hajo Jahn. In more than 20 international symposia from Breslau to Tel Aviv, the works of the poet were introduced and discussed in relation to the relevance for the presence and future.

In Jerusalem, there is a small street named for Else Lasker-Schüler in the neighborhood of Nayot - Rehov Else. Perched on a ridge in the Jerusalem Forest, very close to the Kennedy Memorial (Yad Kennedy), was a sculpture in her honor resembling a slender tree trunk with wings. It was placed there in 1997, and was stolen, probably by metal thieves, in July 2007.

In 2007, her final days in Jerusalem were commemorated in the BBC radio play My Blue Piano by the Scottish playwright Marty Ross (Radio 4 2007) which combined the facts of her dying days with the fantasies of her inner life.

On 7 February 2020, Google celebrated her with a Google Doodle.

All content from Kiddle encyclopedia articles (including the article images and facts) can be freely used under Attribution-ShareAlike license, unless stated otherwise. Cite this article:
Else Lasker-Schüler Facts for Kids. Kiddle Encyclopedia.