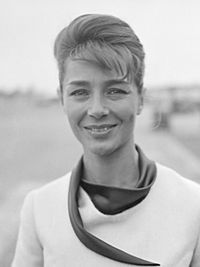 Emmanuelle Riva (born Paulette Germaine Riva; 24 February 1927 – 27 January 2017) was a French actress, writer, photographer, and poet. She was known for her BAFTA Award-winning role as Anne in Amour. She was nominated for an Academy Award and won an BAFTA Award for her role in Amour.

Riva was born on 24 February 1927 in Cheniménil, France. Her grandfather was Italian. Riva was raised and studied acting in Paris.

All content from Kiddle encyclopedia articles (including the article images and facts) can be freely used under Attribution-ShareAlike license, unless stated otherwise. Cite this article:
Emmanuelle Riva Facts for Kids. Kiddle Encyclopedia.