Errol Douglas MBE (born 8 January 1964) is a Guyanese-British hair stylist. He was presented with an MBE by the Queen for services to hairdressing in 2008. In 1998 Douglas opened his own salon in Belgravia, London. 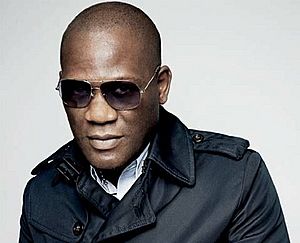 Douglas first started working in an East London salon aged 11. He gained his initial qualifications at Roger Heart's aged 16. During this time he met Paul Edmonds and moved to Neville Daniel. When Paul Edmonds opened his own salon in 1984, Douglas became Edmonds' Artistic Director. Douglas later returned to Neville Daniel as his Artistic Director (for six years) until he opened his own salon business in 1998. Douglas' session styling and fashion work is regularly featured in magazines such as Vogue, Harpers & Queen, Tatler, Red, Cosmopolitan and Elle. In 2010 he was named "Most Wanted Creative Talent" in the Most Wanted Awards for his "mesmerising photographic work". Errol is a regular contributor to live shows and seminars including performances in Australia, Britain, Canada, Germany, Italy, Spain, Switzerland and the US. Douglas has also taken part in the World Hairdressing Congress, BBC Clothes Show Live, Cosmopolitan Show, The Wedding Show, BBC Fashion Live and the Prima Baby Show. While at Paul Edmonds, Errol Douglas became a regular contributor on the BBC Clothes Show and the BBC Style Challenge. More recently, Errol has had a weekly slot on the Boot's Wellbeing channel, appeared on the Disney Channel, Davina McCall's 'Oblivion', Channel Four's 'Model Behaviour' and BBC 2's 'Tell it to me Straight'.

In June 2013 it was announced that Errol Douglas is to launch his own range of electrical styling tools in partnership with UK manufacturer Corioliss Ltd. Douglas and members of his Belgravia salon team contributed to the design of the tools, which include an infrared hair dryer and keratin capsule system hair styler.

Douglas is a supporter of a number of charities, including Hair-Raising (for Great Ormond Street Hospital), and Make A Difference Makeover in support of Centrepoint's work with homeless people.

All content from Kiddle encyclopedia articles (including the article images and facts) can be freely used under Attribution-ShareAlike license, unless stated otherwise. Cite this article:
Errol Douglas Facts for Kids. Kiddle Encyclopedia.