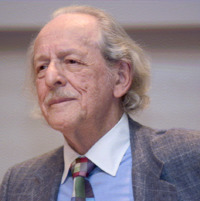 Eugene Garfield (September 16, 1925 – February 26, 2017) was an American linguist and businessman, one of the founders of bibliometrics and scientometrics. Garfield's work led to the development of several Information Retrieval algorithms, like HITS and Pagerank.

Garfield was born in New York City. He studied at the University of Pennsylvania. Garfield died on February 26, 2017 in Philadelphia, Pennsylvania from a heart attack, aged 91.

All content from Kiddle encyclopedia articles (including the article images and facts) can be freely used under Attribution-ShareAlike license, unless stated otherwise. Cite this article:
Eugene Garfield Facts for Kids. Kiddle Encyclopedia.