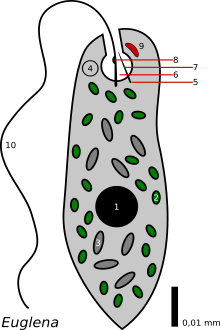 A diagram of Euglena

Euglena is a large genus of unicellular protists: they have both plant and animal characteristics.

All live in water, and move by means of a flagellum. This is an animal characteristic. Most have chloroplasts, which are characteristic of algae and plants.

Euglenids are believed to descend from an ancestor that took up green algae by secondary endosymbiosis.

Over 1,000 species of Euglena have been described, and there are more to be discovered. Their relationships are being analysed.

The number and shape of chloroplasts within Euglena varies greatly. Euglena are able to move through aquatic environments by using a large flagellum for locomotion. To detect light, the cell has an eyespot, a primitive organelle that filters sunlight into light-detecting, photo-sensitive structures. These structures, at the base of the flagellum, allow only certain wavelengths of light to register. With the aid of this photo-sensitive area, the Euglena can shift its position to get better photosynthesis.

The mobility of Euglena also allows hunting. Most Euglena are considered mixotrophs: autotrophs in sunlight and heterotrophs in the dark. Euglena do not have plant cell walls, but have a pellicle instead. The pellicle is made of protein bands that spiral down the length of the Euglena and lie beneath the plasma membrane.

Euglena can survive in fresh and salt water. In low moisture conditions, Euglena forms a protective wall around itself and lies dormant as a spore until environmental conditions improve. Euglena can also survive in the dark by storing starch-like paramylon granules inside the chloroplast. 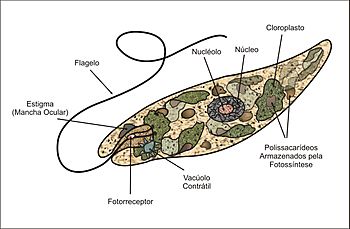 Another diagram of Euglena

Euglenas reproduce asexually by binary fission. There is no evidence of sexual reproduction. Reproduction includes transverse division and longitudinal division, which both occur in the active and encysted forms.

Starting in 2005, the Tokyo-based Euglena Company now markets Euglena-based food and beverage products. The fitness of Euglena for human consumption had been thought about before, but this is the first attempt to cultivate and farm it. The company's main production facility is on Ishigaki Island, Okinawa, where there is a favourable climate.

Euglena Company is also experimenting with the use of Euglena as a potential fuel source.

All content from Kiddle encyclopedia articles (including the article images and facts) can be freely used under Attribution-ShareAlike license, unless stated otherwise. Cite this article:
Euglena Facts for Kids. Kiddle Encyclopedia.