The Evangeline Trail is a scenic roadway in the Canadian province of Nova Scotia.

It is located in the western part of the province, bringing visitors to the Minas Basin, the Annapolis Valley and the Gulf of Maine. The route connects Mount Uniacke in Hants County with Yarmouth at the Bay Ferries terminal where ferries connect to Maine in the United States.

The route is named after the principal character in the epic poem Evangeline by Henry Wadsworth Longfellow. The region from Yarmouth to Halifax via the Annapolis Valley was first connected by the Dominion Atlantic Railway, which is credited with instigating the province's nascent tourism industry during the early 20th century; the DAR was titled "The Land of Evangeline Route" and the Evangeline Trail pays homage to this transport predecessor. 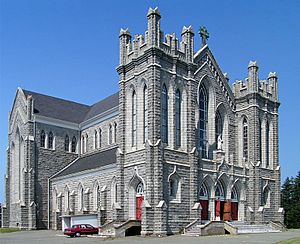 All content from Kiddle encyclopedia articles (including the article images and facts) can be freely used under Attribution-ShareAlike license, unless stated otherwise. Cite this article:
Evangeline Trail Facts for Kids. Kiddle Encyclopedia.