Aylesford is a farming community in the county of Kings in the Annapolis Valley of Nova Scotia, Canada. It is located between the North and South Mountains and located roughly 15 minutes from CFB Greenwood and 10 minutes from Berwick. The population was 829 in 2006 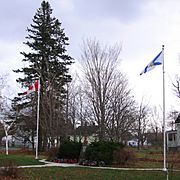 Aylesford is located on the Evangeline Trail (Trunk 1) tourist route, named after the famous Acadian story about Evangeline. It is a service centre for the surrounding agricultural district. An important crop is cranberries which is grown on the peat bogs. Peat moss harvesting operations are also active.

Aylesford's largest tourist attraction, the Oaklawn Farm Zoo, was home to Rutledge, the heaviest living lion in captivity, as certified by Guinness World Records in 1997. Rutledge died in February 2009, three months short of his 18th birthday. The zoo also has a variety of other animals including tigers, Dromedary Camels, and a variety of monkeys.

All content from Kiddle encyclopedia articles (including the article images and facts) can be freely used under Attribution-ShareAlike license, unless stated otherwise. Cite this article:
Aylesford, Nova Scotia Facts for Kids. Kiddle Encyclopedia.