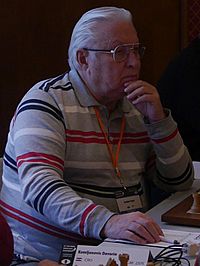 Evgeni Andreyevich Vasiukov (Russian: Евгений Андреевич Васюко́в, 5 March 1933 – 10 May 2018) was a Russian chess Grandmaster. He was born in Moscow.

Vasiukov was rarely at his best in Soviet Championship Finals, which were among the very toughest events in the world. Vasiukov never made the Soviet team for an Olympiad or a European Team Championship.

All content from Kiddle encyclopedia articles (including the article images and facts) can be freely used under Attribution-ShareAlike license, unless stated otherwise. Cite this article:
Evgeni Vasiukov Facts for Kids. Kiddle Encyclopedia.