Exploration of Neptune facts for kids

The Exploration of Neptune started on August 25, 1989, when Voyager 2 became the first and so-far only spacecraft to visit the planet. Like the other gas giants, Neptune has no solid land on its surface so landing on Neptune would be impossible.

NASA is thinking to send another spacecraft known as the Neptune Orbiter to study more about Neptune; the spacecraft is planned to be probably launched on 2035. It would release atmospheric probes, and possibly release a Triton Lander. NASA has said the earliest possible launch date is 2030. Budget cuts may eliminate this proposal. 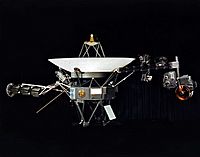 In Voyager 2's last visit with a planet before leaving the solar system, Voyager 2 came 3000 miles (5000 km) above Neptune's north pole, the closest approach it made to any planet after it left Earth. Voyager 2 studied Neptune's atmosphere, its rings, its magnetosphere, and its moons. Several discoveries were made, including the discovery of the Great Dark Spot and Triton's geysers.

Voyager 2 found that Neptune's atmosphere was very active, even though it gets only 3% of the sunlight Jupiter receives. Voyager 2 discovered an anticyclone called the Great Dark Spot, similar to Jupiter's Great Red Spot. However, pictures taken by the Hubble Space Telescope showed that the Great Dark Spot had disappeared. Also seen in Neptune's atmosphere at that time was an almond-shaped spot called "D2", and a bright, quickly moving cloud high above the cloud decks named Scooter.

Voyager 2 discovered six moons orbiting Neptune, but only three were photographed in detail: Proteus, Nereid, and Triton. Proteus turned out to be an ellipsoid, as large as an ellipsoid could become without turning into a sphere. Proteus is very dark in color. Nereid, although discovered in 1949, is still not well known even after Voyager 2 passed by. Triton was flown by at about 25,000 miles (40,000 km) away, and became the last object Voyager 2 would ever explore. Triton was shown to have extraordinary active geysers and polar caps. A very thin atmosphere was found, as well as thin clouds.

All content from Kiddle encyclopedia articles (including the article images and facts) can be freely used under Attribution-ShareAlike license, unless stated otherwise. Cite this article:
Exploration of Neptune Facts for Kids. Kiddle Encyclopedia.