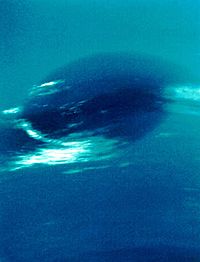 The Great Dark Spot as seen from Voyager 2.

The Great Dark Spot (also known as GDS-89) is a dark spot on Neptune similar in appearance to Jupiter's Great Red Spot. It was discovered in 1989 by NASA's Voyager 2 probe. Although it appears similar to Jupiter's spot, which is an anticyclonic storm (this is like a hurricane), it is believed that the Great Dark Spot is an atmospheric hole similar to the hole in Earth's ozone layer.

However, the insides of Great Dark Spots are mostly cloud-free, and unlike Jupiter's spot, which has lasted for hundreds of years, their lifetimes appear to be much shorter, forming and disappearing once every few years or so. Based on pictures taken by Voyager and since then with the Hubble Space Telescope, Neptune appears to spend a little bit more than half its time with a Great Dark Spot.

The dark, elliptically-shaped spot (with initial dimensions of 13,000 × 6,600 km, or 8,100 × 4,100 mi) was about the same size as Earth, and was similar looking to Jupiter's Great Red Spot. Around the Great Dark Spot, winds were measured blowing up to 2,400 kilometers (1,500 miles) an hour, the fastest in the Solar System. The Great Dark Spot is thought to be a hole in the methane cloud deck of Neptune. The spot was seen at different times with different sizes and shapes.

The Great Dark Spot generated large white clouds at or just below the tropopause layer similar to high-altitude cirrus clouds found on Earth. Unlike the clouds on Earth, however, which are made of mostly crystals of ice, Neptune's clouds are made up of crystals of frozen methane. And while Neptune's clouds usually form and then disappear within a period of a few hours, the clouds in the Great Dark Spot were still present after 36 hours, or two rotations of the planet.

Neptune's dark spots are thought to happen in the troposphere at lower heights (or altitudes) than the brighter upper cloud deck features. As they are stable features that can last for several months, they are thought to be vortex structures.

When pictures were going to be taken of the Great Dark Spot again in November 1994 by the Hubble Space Telescope, it had gone away completely, leaving astronomers to believe that it had either been covered up or that it had just disappeared. The persistence of companion clouds shows that some former dark spots may continue to exist as cyclones even though they are no longer able to be seen as a dark feature. Dark spots may disappear when they move too close to the equator or possibly through some other unknown way.

However, a new spot that looked very much like the old spot appeared in Neptune's northern hemisphere. This new spot, called the Northern Great Dark Spot (NGDS), has remained able to be seen for several years.

All content from Kiddle encyclopedia articles (including the article images and facts) can be freely used under Attribution-ShareAlike license, unless stated otherwise. Cite this article:
Great Dark Spot Facts for Kids. Kiddle Encyclopedia.