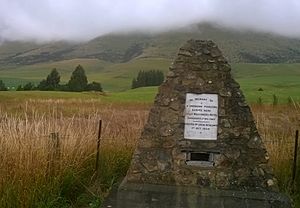 Memorial cairn near the graveyard which is in front of the trees to the left..

Eyre Creek is a locality in Southland, New Zealand, situated to the north-east of the Five Rivers Plain. It lies on State Highway 6, 18 km (11 miles) north of Lumsden. On its northern side is the Jollies Hill Pass (396m, 1300 ft), commonly known as the Jollies, which skirts the western flank of the Mid Dome.

The first settlement in the area was in early 1863 when P. K. Bracken, Thomas Crawley and John Groves built the Dome Pass Accommodation House, known as the Jolly Waggoners. This was just north of the junction of the roads from Riverton, Invercargill and Dunedin and was a popular resting place for waggoners as a night of good fun and a jolly time could be enjoyed. Crawley sold it to John Heath in 1867. By 1871 Donald McLean was the licensee and the hotel was in serious decline.

On the opposite side of the road to where the hotel was sited is a small graveyard where four people who died around the time the hotel was open are buried. Two of these are known. Margaret Smith died in 1865 after the coach she was travelling in overturned in the creek at Parawa, while in 1871 James Cameron died after eating tutu in the bar of the hotel. A cairn beside State Highway 6 commemorates these early pioneers.

In 1859 Eyre Creek Station was taken up, originally being run as an extension of the neighbouring Five Rivers Station. However when Dalgety, Rattray and Company took it over in 1868 they built a manager's cottage at what is now known as Eyre Creek. The stream itself was on the northern side of the property and doesn't run through the locality.

In 1873 William Larnach bought the 45,100 acre station for ₤25,000. He later sold part of his interest to Henry Driver, before they sold, in 1879, to the New Zealand Agricultural Company, of which they were both directors. The company was not a financial success but gradually disposed of parts of the property. Over the years a number of company managers were based at Eyre Creek before the homestead block was sold to John Gibson in 1902.

The current Eyre Creek Station, a small remnant of the original, has its homestead closer to Athol.

All content from Kiddle encyclopedia articles (including the article images and facts) can be freely used under Attribution-ShareAlike license, unless stated otherwise. Cite this article:
Eyre Creek (locality), New Zealand Facts for Kids. Kiddle Encyclopedia.