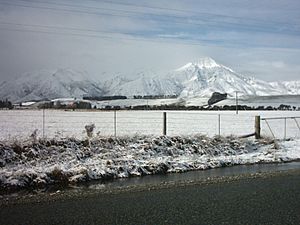 A winter scene in western Southland, at the edge to Fiordland

Southland (Māori: Murihiku) is New Zealand's southernmost region. It consists mainly of the southwestern portion of the South Island and Stewart Island / Rakiura. It includes Southland District, Gore District and the city of Invercargill. The region covers over 3.1 million hectares and spans over 3,400 km of coast.

Southland was a scene of early extended contact between Europeans and Maori, in this case sealers, whalers and missionaries – Wohlers at Ruapuke. In 1853, Walter Mantell purchased Murihiku from local Maori iwi, claiming the land for European settlement. Over successive decades, present-day Southland and Otago were settled by large numbers of Scottish settlers. Immigration to New Zealand had been precipitated by an economic depression in Scotland and a schism between the Church of Scotland and the Free Church of Scotland.

In 1852, James Menzies, leader of the Southland separatist movement, became the first Superintendent of the tiny Southland electorate which was still part of the large Otago region. Under the influence of Menzies, Southland Province (a small part of the present Region, centred on Invercargill) seceded from Otago in 1861 following the escalation of political tensions.

However, rising debt forced Southland to rejoin Otago in 1870, and the province was abolished entirely when the Abolition of the Provinces Act came into force on 1 November 1876. In the 1880s, the development of an export industry based on butter and cheese encouraged the growth of dairy farming in Southland. Consequently, the colony's first dairy factory was established at Edendale in 1882. Much of this export went to the United Kingdom. 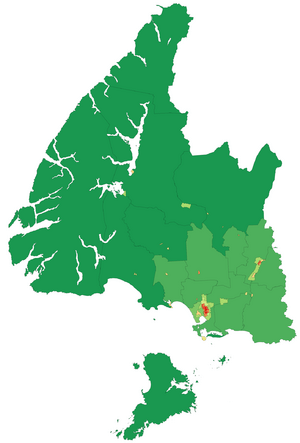 A map showing population density in the Southland Region at the 2006 census.

Southland's two principal urban settlements are the city of Invercargill and the town of Gore. Southland covers an area of 28,681 square kilometres. In the June 2016 it had a population of 98,000 , making it one of New Zealand's most sparsely populated areas. The sizable western part Fiordland is almost empty of permanent human inhabitation.

Southland is divided into two parliamentary electorates. The large rural electorate of Clutha-Southland, held by Todd Barclay, also includes some of the neighbouring Otago Region. The seat of Invercargill is held by Sarah Dowie. Both are members of the governing National Party. Under the Maori seats system, Southland is part of the large Te Tai Tonga electorate which covers the entire South Island and the surrounding islands, and is currently held by the Labour Party MP Rino Tirikatene.

Regional responsibilities are handled by the Southland Regional Council (Environment Southland). Three Territorial Authorities fall entirely within Southland. The Invercargill City Council governs Invercargill itself, together with some adjoining rural areas. Much of the remaining area of Southland, including all of Stewart Island/Rakiura, falls within the Southland District, which is administered by its own Council, also based in Invercargill. The Gore District Council administers the town of the same name and its rural hinterland. In 2001, three authorities (Invercargill City, Southland District and Gore District Councils) created the joint initiative agency Venture Southland which is the agency responsible for the region’s economic and community development initiatives and tourism promotion.

Politically, Southland proper extends from Fiordland in the west past the Mataura River to the Catlins the east. To the north, Southland is framed by the Darran and Eyre Mountains. Farther south lies Stewart Island which is separated from the mainland by the Foveaux Strait.

Southland contains New Zealand's highest waterfall—the Browne Falls. Lake Hauroko is the deepest lake in the country. The highest peak in Southland is Mount Tutoko, which is part of the Darran mountains. The largest lake in Southland is Lake Te Anau followed by Lake Manapouri which both lie within the boundaries of Fiordland National Park. Established on 20 February 1905, it is the largest national park in New Zealand—covering much of Fiordland which is devoid of human settlement.

Fiordland's terrain is dominated by mountains, fjords and glacial lakes carved up by glaciations during the last ice age, between 75,000 to 15,000 years ago. The region's coast is dotted by several fjords and other sea inlets which stretch from Milford Sound in the north to Preservation Inlet to the south. Farther north and east of Fiordland lie the Darran and Eyre Mountains which are part of the block of schist that extends into neighboring Central Otago.

Farther east of the Waiau River, the Southland Plains predominate which include some of New Zealand's most fertile farmlands. The region's two principal settlements Invercargill and Gore are located on the plains. The Plains extend from the Waiau River in the west to the Mataura River to the east. It can be divided into three broad areas: the Southland plain proper, the Waimea Plains and the lower Waiau plain to the west near the Waiau river. Off the coast of Southland lies the Great South Basin which stretches over 500,000 km2 (covering an area 1.5 times New Zealand’s land mass). It is one of the country's largest undeveloped offshore petroleum basins with prospects for both oil and gas.

Weather conditions in Southland are cooler and wetter than the other regions of New Zealand due to its distance from the Equator. However, they can be broken down into three types: the temperate oceanic climate of the coastal regions, the continental climate of the interior and the wetter mountain climate of Fiordland to the west. Due to its closer proximity to the South Pole, the Aurora Australis or "Southern Lights" are more commonly seen than in other regions.

The coastal regions have cool summers and mild winters. The mean daily temperature varies from 5.2 °C in July to 14.9 °C in January. Rainfall varies from 900mm to 1300 mm annually with rainfall being more frequent in coastal areas and rainbows being a regular occurrence in the region. Summers are temperable with downpours and cold snaps not being uncommon. On 7 January 2010, Invercargill was hit by a hail storm with temperatures plummeting rapidly from 15 °C to 8 °C in the afternoon. Occasionally, temperatures exceed 25 °C with an extreme temperature of 32.2 °C having been reached before in Invercargill.

Winters are colder and more severe than other regions. The mean maximum temperature in July is 9.5 °C and Southland’s lowest recorded temperature was −18 °C in July 1946. Snow and frost also frequently occur in inland areas but are less common and extreme in coastal areas where the oceans act as a moderating factor. The long-lasting cool and wet conditions are influenced by the presence of a stationary low-pressure zone to the southeast of the country.

Fiordland has a wet mountain climate though conditions vary due to altitude and exposure. Rainfall is the highest in the country and varies between 6,500 to 7,500mm annually. The farthest coastal reaches of Fiordland are characterized by a limited temperature range with increasing rainfall at higher altitudes. The moist wet climate is influenced by approaching low-pressure systems which sweep across the country entering Fiordland.

Approximately 94% of the population is of European lineage and the region is noted for a relatively Scottish and Irish heritage. Māori comprise about 10% of the population and are largely concentrated around the port of Bluff. During the 1940s, the development of the freezing works boosted a short-term immigration to the region by North Island Māori.

Around 51.6 percent of Southland's population affiliated with Christianity at the 2013 Census, making it one of two regions in New Zealand (the other being Hawke's Bay) with a majority Christian population.

All content from Kiddle encyclopedia articles (including the article images and facts) can be freely used under Attribution-ShareAlike license, unless stated otherwise. Cite this article:
Southland, New Zealand Facts for Kids. Kiddle Encyclopedia.