Far West, Missouri, was a Latter Day Saint (Mormon) settlement in Caldwell County, Missouri. Today it is a historic site.

The town was founded by Missouri Mormon leaders, W. W. Phelps and John Whitmer in August 1836 shortly before the county's creation. The town was platted originally as a 1-mile (1.6 km) square area, centered on a public square which was to house a temple. The design of the town resembled Mormon founder and prophet Joseph Smith Jr.'s plan for the City of Zion, which had been planned to be built in the town of Independence, Jackson County, Missouri. As the town of Far West grew, the plat was extended to 4 square miles (10 km2).

Early Latter-day Saints began to settle in northwestern Missouri soon after the Church of Jesus Christ of Latter Day Saints was organized in 1830. According to a revelation given by Joseph Smith Jr., Independence would be the "centerplace" of the City of Zion when Jesus returned. However, disputes between Mormon and Missourian settlers in Independence led to the expulsion of the Mormons from Jackson County in 1833. Most Mormons temporarily settled in Clay County, Missouri. Towards the end of 1836, Caldwell County was created specifically for Mormon settlement to compensate Mormon property losses in Jackson County. Shortly after the creation of Caldwell County, Far West was made the county seat.

Far West became the headquarters of the Latter-day Saint movement in early 1838 when Prophet Joseph Smith and Sidney Rigdon relocated to the town from the previous church headquarters, Kirtland, Ohio. Joseph Smith taught the Latter-day Saints that the Garden of Eden had been in Jackson County and when Adam and Eve were expelled from the Garden, they moved to the area now comprising Caldwell and Daviess Counties, Missouri. While headquartered in Far West, the official name of the church was changed from Church of Jesus Christ to the Church of Jesus Christ of Latter Day Saints.

New problems erupted between the Mormons and their neighbors when the Mormons began to settle in the counties surrounding Caldwell, including De Witt in Carroll County and Adam-ondi-Ahman in Daviess County. A series of escalating conflicts followed and the Governor of Missouri eventually called out 2,500 state militiamen to put down what he alleged to be a "Mormon rebellion." Latter Day Saints poured into Far West for protection and found themselves under siege. Joseph Smith Jr., Sidney Rigdon and others surrendered at the end of October, 1838, and were put on trial by the state for treason. The main body of the Mormons were then forced to sign over their property in Far West and Caldwell County to pay for the militia muster and then leave the state. The main body later settled in Nauvoo, Illinois. 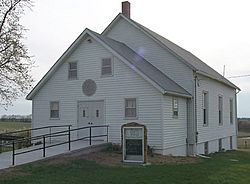 Far West became a ghost town soon after the departure of most of the Mormon population. The county seat was moved to Kingston, Missouri and many of the log houses in Far West were relocated. Former Mormon John Whitmer continued to live in the nearly empty town, where he owned a large farm.

Today Far West is a historic site seven miles (11.26 km) south of U.S. Route 36 on Route D. The Church of Jesus Christ of Latter-day Saints maintains a historic site there, including the cornerstones of the planned temple. It also honors the Far West legacy in the name of a ward (located in Cameron), and, since 2015, a stake (centered in Gallatin). Some Latter Day Saints expect that a temple will be located on this spot at some time in the future. The Community of Christ, formerly known as the Reorganized Church of Jesus Christ of Latter Day Saints, has a branch congregation that meets in Far West.

In 2004 construction began on a historic village adjacent to the temple site. It is operated by the Far West Historical Society to accommodate and increase tourism. The Country Store has been in operation since 2006. Future plans include overnight housing and conference facilities. The progress of this project indicates a major shift in the growth of the area.

On May 2012, The Church of Jesus Christ of Latter-day Saints confirmed that it purchased 6,000 acres of Missouri farmland and three historical sites from the Community of Christ.

All content from Kiddle encyclopedia articles (including the article images and facts) can be freely used under Attribution-ShareAlike license, unless stated otherwise. Cite this article:
Far West, Missouri Facts for Kids. Kiddle Encyclopedia.