Farleigh is a village in the civil parish of Chelsham and Farleigh in the Tandridge District of Surrey, England. It is located in the North Downs AONB and the Metropolitan Green Belt, 4.5 miles (7.2 km) south east of Croydon, 13.4 miles (21.6 km) south of London and 25 miles (40 km) WNE of Surrey's county town, Guildford.

Farleigh lay within the Anglo-Saxon feudal division of Tandridge hundred.

Farleigh appears in Domesday Book of 1086 as the manor of Ferlega. It was held by Robert de Wateville from Richard Fitz Gilbert (de Clare and de Tonbridge). Its domesday assets were: ½ hide; 2 ploughs, 1 ox, to its overlords per year rendering £3. Judging by the style of the western doorway of St Mary's Church, a date about the close of the 11th century is indicated, at least for the building of the first stone church. The present building is of field flints, with the original rough yellow plaster or mortar coat outside, and with dressings of local firestone and inside a little caen stone.

In the 13th century the manor belonged to Walter de Merton, who founded Merton College, Oxford and settled his property in Farleigh upon the new society. The living is a discharged rectory which gives rise to chancel repair liability on the holders of Merton College's land. The church is on an elevated site, and consists of a body and chancel only, with no tower. Charles I in 1634 confirmed the rights of the manor with the advowson and certain woods called Farley Parks, Farley Frith, Popletwood and Hedgegroves.

In 1911 Merton college continued to hold the manor. 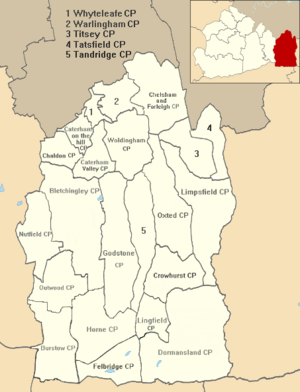 Farleigh makes up the northern part of Chelsham and Farleigh civil parish, both villages are on the North Downs, an AONB and within the Green Belt Farleigh is 4.5 miles (7.2 km) south east of Croydon, 13.4 miles (21.6 km) south of London and 25 miles (40 km) WNE of Surrey's county town, Guildford.

Together with Chelsham the total population of the civil parish was 356 as measured by the 2001 census.

Farleigh lies high and commands views for a long distance with well wooded edges and the soil is most suited to pasture, including over London, from the centre of which it is visible from several locations, such as the golf course. The administrative centre of the district, Oxted is below the uplands upon which Farleigh lies, 4 miles (6.4 km) due south. The highest point of the North Downs, Botley Hill is a slight, gentle rise south of the Chelsham and Warlingham, which are on the same upland, along the straight road Croydon Road. Croydon Road afterwards veers east and descends the ridge to Westerham, Kent. 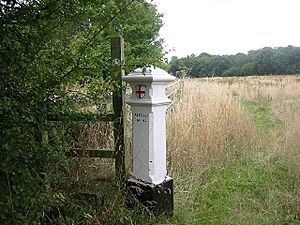 Characteristic white coal-tax post by a public footpath in Fickleshole

Fickleshole is a hamlet and neighbourhood less than 1 mile (1.6 km) east of the bulk of homes in Farleigh.

Fickleshole is mainly used for farming, with stables home to over eighty horses. Fickleshole was established in the early sixteenth century. As nearby New Addington to the northeast has been served by Tramlink, Fickleshole is relatively close to a good public transport system. Roads leading to the hamlet are very narrow with passing places, based on the old roads as used by horse and carts. Many of the roads are unsuitable for heavy goods vehicles. The White Bear public house, with its white bear sculpture outside, is the main landmark of the hamlet. 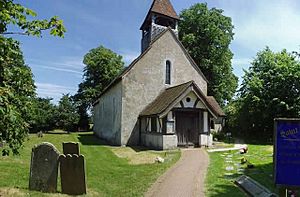 St Mary's Church, the history of which is described above, is a Grade I listed building.

It has a football club called Farleigh Rovers F.C. in Warlingham. Their ground is called Parsonage Field. They play in The Cherry Red Combined Counties Football League and are in the same league as Warlingham F.C..

All content from Kiddle encyclopedia articles (including the article images and facts) can be freely used under Attribution-ShareAlike license, unless stated otherwise. Cite this article:
Farleigh, Surrey Facts for Kids. Kiddle Encyclopedia.