The fathead minnow (Pimephales promelas) is a species of freshwater fish. They belong to the Pimephales genus of the cyprinid family. They live in North America and central Canada. This minnow has been introduced to many areas by people. They are golden and are known as the rosy red minnow. They are a feeder fish and are sold in pet stores.

The fathead minnow in its wild form is generally dull olive-grey in appearance, with a dusky stripe extending along the back and side, and a lighter belly. There is a dusky blotch midway on the dorsal fin. Breeding males acquire a large, grey fleshy growth on the nape, as well as approximately 16 white breeding tubercles on the snout. 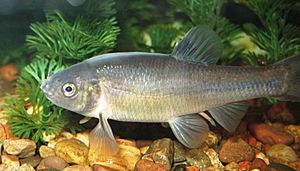 Fathead minnows are distributed across North America from Chihuahua, Mexico, north to the Maritime Provinces and Great Slave Lake drainage of Canada and have been introduced to Atlantic and Pacific coastal drainage basins in the United States. Their tolerance for multiple environmental conditions, characteristics of their life history, and their popularity as bait species contribute to their widespread distribution. The fathead minnow is quite tolerant of turbid, low-oxygen water and can most commonly be found in small lakes, ponds, and wetlands. They can also be found in larger lakes, streams, and other habitats, as well.

Fathead minnows are a largely preyed upon fish that is eaten by mainly piscivorous fish such as Largemouth Bass, Northern Pike, Yellow Perch, Walleye, and various other types of fish.

Ostariophysan fishes, which include fathead minnows, possess an alarm substance, or Schreckstoff, in distinctive epidermal club cells. The alarm substance is released upon mechanical damage to these club cells due to a predator attack, and can be detected by other ostariophysan fishes which then engage in antipredator behaviors such as hiding or dashing away. Fathead minnows learn to recognize an animal as a potential predator when it is presented in conjunction with the alarm substance. Also, alarm substance ingested by the predator will chemically label it as dangerous to naïve fathead minnows, thereby resulting in learned predator recognition. Prey fishes with chemical predator recognition abilities can inhabit areas with low visibility and more quickly detect ambush predators like the fathead minnow’s primary predator, the northern pike.

The rosy-red strain of Pimephales promelas in a home aquarium

The fathead has been very commonly used as a baitfish, and more recently has emerged in the aquarium trade as the rosy-red minnow. This colour morph was discovered in several Arkansas breeding farms in 1985. Both sexes of this strain have a rosy-golden body and fins and may express dark splotches of wild-type fathead coloration, and are sold in pet shops primarily as feeder fish. They can also be used in home aquariums as pets.

This species is also important as a biological model in aquatic toxicology studies. Because of its relative hardiness and large number of offspring produced, EPA guidelines outline its use for the evaluation of acute and chronic toxicity of samples or chemical species in vertebrate animals.

The fathead's invasive status in Europe is cited as the main cause for the spread of enteric redmouth disease among trout and eels there.

In the aquarium and ornamental pond

Generally only the rosy-red variety is sold in pet shops (though very often several wild types come in with each shipment), and is summarily the most likely to be found in an aquarium. These fish are social, active, and moderately hardy. Like most cyprinids, they will accept almost any type of food. They can be bred in an aquarium, and the fathead minnow is one of the only cyprinids that protects its eggs in the nest (carried out by the male). Fatheads will live about two years if they have spawned, but significantly longer (potentially up to four years) if they have not.

The fish can be found at many pet stores as a feeder fish under the name "rosy-red minnow". In an aquarium the fish needs to be in a school (at least 5 or 6) or it tends to be territorial but will not nip fins but instead will ram its head into other species of fish and briefly chase them.

All content from Kiddle encyclopedia articles (including the article images and facts) can be freely used under Attribution-ShareAlike license, unless stated otherwise. Cite this article:
Fathead minnow Facts for Kids. Kiddle Encyclopedia.