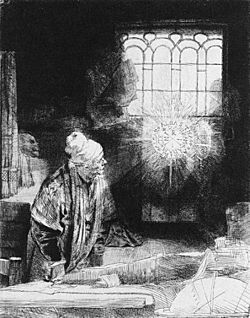 Faust shown in an etching by Rembrandt van Rijn (about 1650).

Faust or Faustus is a character from German legendary stories. His name comes from a Latin word meaning "lucky". The legend is about a man called Faust. Faust wants to have knowledge. He meets the Devil. The Devil tells Faust he can have anything he wants. In return, the Devil says, Faust must give him his soul. Faust agrees, and the Devil lets Faust have a wonderful time, but in the end Faust has to go to Hell.

The adjective "Faustian" is used to describe a person who wants something so much that it leads them into trouble.

In the early versions of the Faust story: in ballads, dramas and puppet-plays, Faust is always damned (meaning he will have to go to Hell). This is because he prefers human knowledge instead of God’s knowledge. This was thought to be very bad at that time.

Some of the plays and comic puppet theatre from around the 16th century make up their own versions of the story. They often show Faust as a figure of vulgar fun. The story became popular in England when Christopher Marlowe wrote a play called The Tragical History of Doctor Faustus. But in Goethe's version of the story two centuries later, Faust is described as a well-educated man who wants more than just "meat and drink."

All content from Kiddle encyclopedia articles (including the article images and facts) can be freely used under Attribution-ShareAlike license, unless stated otherwise. Cite this article:
Faust Facts for Kids. Kiddle Encyclopedia.