Fitzroy Island (originally Koba or Gabar) is a continental island offshore from Cape Grafton, 29 km (18 miles) south-east of Cairns, Queensland, Australia. It is a locality in the Cairns Region. In the 2016 census Fitzroy Island had a population of 44 people.

Fitzroy enjoys a typical North Queensland tropical climate but with the added advantage of the cooling effects of the prevailing southeasterly ocean breezes for the majority of the year. Temperatures range from 24 - 31 C (75 - 88 F) in summer and 19 - 25 C (66 - 77 F) in winter. 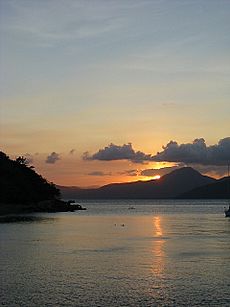 The island separated from the mainland about 8000 years ago, at the end of the last ice age. There were Aboriginal visits, mainly for visiting hunting trips and recreation. Lieutenant James Cook named the island in 1770. The island was used for a considerable time as a significant Chinese quarantine station for the Queensland goldfields. Subsequently it was used as a mission school and during World War Two, as a coast watch station.

The island has also been important as a significant lighthouse base, with the last permanent lighthouse structures on the main island still being an important community attraction. Since its closure the marine community has been serviced with an automatic lighthouse based on the adjacent Little Fitzroy Island. There has been both a giant clam farm at Welcome Bay and now a tourist resort and day visitor centre.

The island is home to a 100-room resort. Property developer Doug Gamble bought and renovated the resort in 2010. The resort manages the camping area.

All content from Kiddle encyclopedia articles (including the article images and facts) can be freely used under Attribution-ShareAlike license, unless stated otherwise. Cite this article:
Fitzroy Island (Queensland) Facts for Kids. Kiddle Encyclopedia.