Flag of Ohio facts for kids

The Ohio Burgee is the official flag of the U.S. state of Ohio. Ohio's swallowtail flag is the only non-rectangular U.S. state flag. Its red, white, and blue elements symbolize the state's natural features and order of admission into the Union. A prominent disc in the flag's triangular canton is suggestive of the state's name.

The flag was designed in 1901 by John Eisenmann for the Pan-American Exposition and adopted in 1902. Ironically, the Pan-American Exposition would be where President William McKinley, a native of Niles, Ohio, was assassinated. Before that, for nearly a century after statehood, Ohio had no legally authorized state flag. One unsuccessful proposal called for a design based on the state seal.

Ohio has adopted an official salute to the flag and a 17-step procedure for folding it. The Ohio flag has influenced a number of logos and municipal flags within the state. A scarlet-colored gubernatorial flag is based on the state seal. 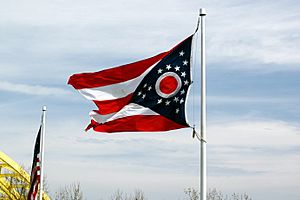 An Ohio flag flies above Sawyer Point in Cincinnati.

The Ohio state flag's design is defined in the Ohio Revised Code, section 5.01:

The flag of the state shall be burgee-shaped. It shall have three red and two white horizontal stripes that represent the roads and waterways of the state. The union of the flag shall be seventeen five-pointed stars, white in a blue triangular field that represents the state's hills and valleys, the base of which shall be the staff end or vertical edge of the flag, and the apex of which shall be the center of the middle red stripe. The stars shall be grouped around a red disc superimposed upon a white circular "O." The thirteen stars grouped around the "O" represent the original states of the United States and the four stars added to the peak of the triangle symbolize that Ohio was the seventeenth state admitted to the union. The "O" represents the "O" in "Ohio" and suggests the state's nickname, the buckeye state. The proportional dimensions of the flag and of its various parts shall be according to the official design on file in the office of the secretary of state. 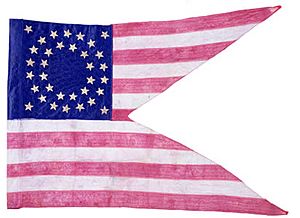 A typical 34-star Union guidon, carried by many Ohio cavalry units during the Civil War.

In addition to resembling the letter O and a buckeye nut, the flag's annulus also represents "the original territory of Ohio" in the Northwest Territory.

Ohio's flag is the only non-rectangular U.S. state flag. It is a rare example of a non-quadrilateral civil flag, another well-known example being the flag of Nepal. According to vexillologist Whitney Smith, it may be loosely based upon cavalry flags of the Civil War and Spanish–American War. The flag has been officially defined as a "burgee" since 2002, even though burgees are typically used as maritime flags. Its shape, lack of text, and mirror symmetry allow it to be flown or hung in various orientations without affecting legibility. On account of the flag's uncommon shape, foreign manufacturers have occasionally set the entire design against a white, rectangular field.

For nearly a century after statehood, Ohio had no legally authorized state flag. The state militia carried regimental colors based on the Stars and Stripes, with the addition of "a large eagle, with the number of the regiment and the prescribed number of stars above". 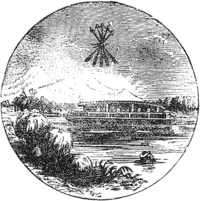 From 1831 to 1865, the design of the state seal was unregulated, but common embellishments included a flatboat or canal boat.

By the early 1850s, Ohioans expressed interest in adopting a state flag, as several other states had already done. In late 1860, Qtr. Mr. Gen. David L. Wood and Adj. Gen. Henry B. Carrington devised a flag consisting of the state seal upon a white field. They had it flown above the Ohio State Arsenal in Columbus, in hopes that it might someday become the state flag. On January 17, 1861, at a banquet organized by the Columbus Typographical Union Local #5, future U.S. President James A. Garfield gave a speech defending the national flag as the only flag Ohio's soldiers would march to battle under. The generals, in attendance, were moved to set aside their proposal and hoist the Stars and Stripes in its place. Later that year, Wood and Carrington joined fellow Ohioans in battle under the 34-star Union flag, which would serve as the inspiration for a state banner decades later. 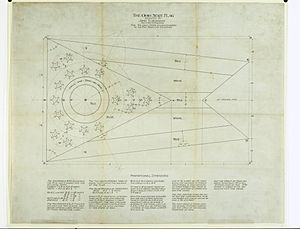 In 1901, Cleveland architect John Eisenmann was commissioned to design an exhibition hall for his state at the Pan-American Exposition in Buffalo, New York. He developed a distinctive flag to fly over each corner of the Ohio Building. The wool flags officially represented the Ohio Pan-American Exposition Commission rather than the state. On July 18, Governor George K. Nash visited the exposition, where he was presented with one of the flags, which is now held in the Ohio History Connection collections. Eisenmann secured a U.S. design patent for his design, which he described as "a triangular forked or swallow-tailed flag corresponding to the shape generally known as a 'cavalry-guidon' or 'broad pennant.'"

In 1902, State Representative William S. McKinnon, a member of the Ohio Pan-American Exposition Commission, introduced House Bill 213 designating Eisenmann's design as the official flag. It became law on May 9, making it the 20th U.S. state flag or banner. (Eisenmann had assigned his patent, which had a term of three and a half years, to the State of Ohio on April 24.) 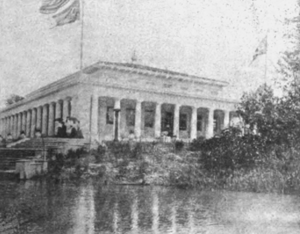 The Ohio Building at the 1901 Pan-American Exposition

Because Eisenmann's design deviated from the "seal on a bedsheet" design then nearly universal among state flags, the press looked overseas for precedents: the layout was likened to either the flag of Cuba or of the Philippines, while the red and white annulus was derided for its similarity to the sun on the Japanese flag.

Initially, Ohio's flag was seldom used, in part due to the prevailing opinion that the Stars and Stripes should hold a monopoly on patriotic displays. Similar sentiment hindered the adoption of municipal flags in Cleveland and Cincinnati, to the extent that both were downplaced as mere "banners" for promotional purposes. In 1903, it was reported that, among state politicians, only Governor Nash displayed the guidon.

In the century following its adoption, the guidon gained significant popularity, being flown not only by the state but frequently also by its residents and businesses. In 2001, the North American Vexillological Association surveyed its members on the best design among the 72 official flags of the U.S. states and territories and Canadian provinces. Ohio's ranked 15th.

In 2002, the Ohio General Assembly commemorated the 100th anniversary of the state flag's adoption by adopting a salute to the flag, to be recited after the Pledge of Allegiance:

I salute the flag of the state of Ohio and pledge to the Buckeye State respect and loyalty.

The flag of Ohio is officially folded in 17 steps.

A method of folding the flag of Ohio was created by Alex Weinstock, an Ohio Boy Scout, for his Eagle Scout service project. It requires two people. The procedure was passed by the 125th Ohio General Assembly as House Bill 552 and signed into law by Governor Bob Taft on February 15, 2005:

The general assembly hereby establishes a recommended procedure for the folding of the state flag by two people. The procedure is as follows:

Starting on the end formed by the fold of the pointed end back onto itself, fold two inches of the flag onto itself for a flag with a three-foot hoist and a five-foot fly, or another appropriate width of fold for a flag of a different size. Repeat the folds a total of fourteen times, alternating the folds in a fan-like manner.

The result is a total of seventeen folds symbolizing that Ohio was the seventeenth state admitted to the Union. Finally, neatly and snugly wrap the remaining length of flag around the fan-folds to form a compact rectangle.
—Ohio Rev. Code §5.014. "Procedure for folding state flag".

Ohio is not the only state that has designated a folding procedure for its flag; however, Ohio's procedure takes on special importance due to the flag's irregular shape. A flag vendor in Arkansas has described the procedure as "quite a challenge".

Ohio's flag is regularly flown during football games by The Ohio State University Marching Band's "JI-Row" as the percussion section's row mascot. The Columbus Blue Jackets logo and Cincinnati Bengals fan flag are both based on the state flag.

A number of municipalities and counties in Ohio have adopted pennants and swallowtails based on the state burgee. The city of Mentor and Adams County have flags that essentially replace the annulus with a seal and modify the pattern of stars in the triangular union.

The Flag of the Governor of Ohio, incorporating the 1996 state coat of arms

The flag of the Governor of Ohio consists of the Great Seal of Ohio encircled with 13 white stars on a scarlet field, with a five-point star in each corner. Like the state flag, it has 17 stars in total.

The Adjutant General's office adopted this design in 1905 to represent the Governor on official occasions. One such flag hangs in the Rutherford B. Hayes Center Library, a memorial to the 32nd Ohio Governor and 19th U.S. President. The design was officially recognized by the 96th General Assembly effective October 3, 1945:

It shall have a white star in each of the four corners on an oblong scarlet background with the official seal of the state of Ohio in the center surrounded by thirteen white stars. The proportional dimensions of the flag and of its various parts shall be according to a design approved by the adjutant general and in accordance with the governor's flag used by the adjutant general's office for over thirty years.

Since September 30, 1963, the flag has been defined in greater detail:

The flag of the governor of this state will be of scarlet wool bunting, six feet eight inches hoist by ten feet six inches fly. In each of the four corners will be a white five-pointed star with one point upward. The centers of these stars will be twelve inches from the long edges and seventeen inches from the short edges of the flag. In the center of the flag will be a reproduction of the great seal of Ohio in proper colors, three feet in diameter, surrounded by thirteen white stars equally spaced with their centers on an imaginary circle four feet three inches in diameter. All stars shall be of such size that their points would lie on the circumference of an imaginary circle ten inches in diameter.

The Ohio Revised Code also specifies smaller versions of this design to be used as the governor's naval flag and automobile flag.

All content from Kiddle encyclopedia articles (including the article images and facts) can be freely used under Attribution-ShareAlike license, unless stated otherwise. Cite this article:
Flag of Ohio Facts for Kids. Kiddle Encyclopedia.