Flora is a town in Madison County, Mississippi, United States. The population was 1,886 at the 2010 census. It is part of the Jackson Metropolitan Statistical Area.

The town is named after Flora Mann Jones, an early resident.

Graves in Flora's cemetery date to 1821. A post office was established in 1883. That same year, Flora became a stop on the newly constructed Yazoo and Mississippi Valley Railroad. The railroad depot is now a museum, and is listed on the National Register of Historic Places.

Flora was incorporated in 1886.

The site was declared surplus in 1945, and the army certified it "completely decontaminated".

In 1947, the Mississippi Department of Education planned to turn part of the plant into a vocational school for African-Americans, until white residents protested the governor, stating that property values would be ruined.

One of the reinforced bunkers eventually became the "Southern Vital Records" storage facility, and in 1977, a local high school student found an abandoned M-2A2 tank in a wooded area.

In 2008, the U.S. Department of Homeland Security announced that the Flora Industrial Park was one of six locations in the United States being considered for the construction of a new National Bio and Agro-Defense Facility. Flora's Mayor, Scott Greaves, responded to opposition to the facility by stating in 2007: "Education is the whole key to it.. You have to find the people who are concerned and educate them. In the end, you're still going to have a few idiots". Manhattan, Kansas was selected as the site for the new facility.

According to the United States Census Bureau, the town has a total area of 3.4 square miles (8.8 km2), all land. 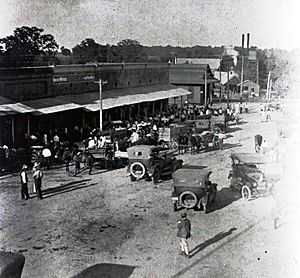 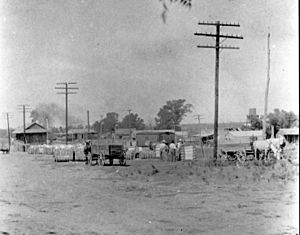 There were 575 households, out of which 36.5% had children under the age of 18 living with them, 44.7% were married couples living together, 25.0% had a female householder with no husband present, and 27.5% were non-families. 25.4% of all households were made up of individuals, and 9.7% had someone living alone who was 65 years of age or older. The average household size was 2.69 and the average family size was 3.21.

Just outside the Flora city limits lies a forest collection of petrified wood, the Mississippi Petrified Forest, which purports to be the only such forest east of the Mississippi River.

The Town of Flora is served by the Madison County School District.

The Tri-County Academy, a private school, is located in Flora.

All content from Kiddle encyclopedia articles (including the article images and facts) can be freely used under Attribution-ShareAlike license, unless stated otherwise. Cite this article:
Flora, Mississippi Facts for Kids. Kiddle Encyclopedia.