Canton is a city in Madison County, Mississippi, United States. The population was 13,189 at the 2010 census. It is the county seat of Madison County, and situated in the northern part of the metropolitan area surrounding the state capital, Jackson.

Much of Canton is on the National Register of Historic Places. The courthouse square is a historic shopping district and host to the Canton Flea Market. The picturesque Georgian courthouse is particularly notable and often appears in photographic exhibits of the South. The east side of town is a large part of the historic district with many homes.

Although not a major battle site during the Civil War, Canton was important as a rail and logistics center. Many wounded soldiers were treated in or transported through the city, and as a consequence it has a large Confederate cemetery.

The city is home to a large auto manufacturing facility owned by Nissan. 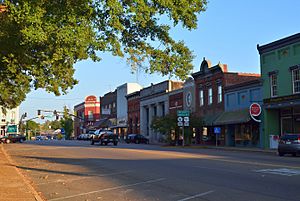 There were 4,093 households out of which 37.1% had children under the age of 18 living with them, 32.4% were married couples living together, 34.9% had a female householder with no husband present, and 26.9% were non-families. 23.8% of all households were made up of individuals and 10.9% had someone living alone who was 65 years of age or older. The average household size was 2.99 and the average family size was 3.55.

Canton is officially on the Mississippi Blues Trail. Elmore James, a blues singer and a familiar figure in Canton, learned electronics by working in a radio repair shop on Hickory Street. Canton is rich in blues history centered on the juke joints of Hickory Street, known to locals as "The Hollow", as well as other places in Canton. A Mississippi Blues Trail historic marker was placed in Canton on Hickory Street to honor the contribution of James to the development of the blues in Mississippi. Other noted blues performers associated with Canton include Grady Champion, Little Brother Montgomery, William “Do-Boy” Diamond, Boyd Rivers and Johnny Temple. Musicians include studio guitarist Bucky Barrett and the slide guitarist Sonny Landreth. Gospel singers include the Canton Spirituals and Reverend Cleophus Robinson.

In his dedication of Hickory Street, Governor Haley Barbour said,

With his innovative contributions to the electric slide guitar style, legendary Elmore

James is among the many reasons Mississippi is truly the birthplace of America’s music. Like so many others, Elmore’s work was greatly influenced by his childhood home in Canton, where he joined the ranks of musicians like B.B. King and Little Milton to play the blues on Hickory Street. Today’s blues trail marker not only recognizes the achievements of the talented Elmore James but also pays tribute to Canton’s colorful blues heritage.

The climate in this area is characterized by hot, humid summers and generally mild to cool winters. According to the Köppen Climate Classification system, Canton has a humid subtropical climate, abbreviated "Cfa" on climate maps.

All content from Kiddle encyclopedia articles (including the article images and facts) can be freely used under Attribution-ShareAlike license, unless stated otherwise. Cite this article:
Canton, Mississippi Facts for Kids. Kiddle Encyclopedia.