Ford City is a borough in Armstrong County, Pennsylvania, United States, 40 miles (64 km) northeast of Pittsburgh along the east bank of the Allegheny River and 4 miles (6 km) south of Kittanning, the county seat. The population of Ford City at the 2010 census was 2,991.

Ford City was founded in 1887 as a company town by the Pittsburgh Plate Glass Company (now PPG Industries) as the site for its Works No. 3 glass factory. The town was named in honor of the company founder, John Baptiste Ford (1811–1903). The factory employed as many as 5,000 workers in its heyday. PPG shut down its Ford City operations in the 1990s. The once largest employer in Armstrong County, Eljer Plumbing, shut down its Ford City plant in 2008.

Ford City has its own elementary school and in the past had its own high school, Ford City Jr/Sr High School. This, however, had not always been the case. During the early 1990s, Ford City students attended the same school as students from nearby Kittanning. The temporarily consolidated school was called Armstrong Central.

Currently, students in the Ford City area attend Lenape Elementary from kindergarten through sixth grade. The building recently underwent an extensive renovation process. It is located at 2300 Center Avenue, Ford City. According to statistics from City-data.com, 784 students attended the school in 2007. In honor of the Lenape Native American tribe from the area, the school's mascot is a Native American.

The town's high school, Ford City Jr/Sr High School did not have a separate junior high school. Grades seven through twelve were combined in one building. Unlike the elementary school, the high school was located in Ford City's "downtown" area at 1100 Fourth Avenue, Ford City. According to the Ford City High School Alumni Association [1], FCHS opened its doors in 1909, awarding diplomas to its first graduating class of 4 students on May 10, 1910. The school awarded diplomas to its final graduating class in June 2015. Today, students from Ford City attend Armstrong Jr/Sr High School, a combined 7-12th grade school located at 300 Buffington Drive in Manor Township between Ford City and Kittanning. 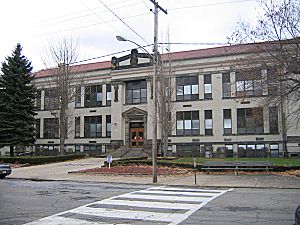 In addition to the town's elementary and high school, two additional schools are located in the area. Students can attend Lenape Vocational Technical School beginning their junior year. It is located just below the elementary school (hence the similar name). Furthermore, the area's only Catholic elementary school, Divine Redeemer, is located on 4th Avenue in downtown Ford City.

All content from Kiddle encyclopedia articles (including the article images and facts) can be freely used under Attribution-ShareAlike license, unless stated otherwise. Cite this article:
Ford City, Pennsylvania Facts for Kids. Kiddle Encyclopedia.