Ford Heights (formerly East Chicago Heights) is a village in Cook County, Illinois, United States. The population was 2,763 at the 2010 census, down from 3,456 in 2000. It is located approximately 25 miles (40 km) south of downtown Chicago and is part of the Chicago–Naperville–Joliet, IL-IN-WI Metropolitan Statistical Area.

The area that would eventually become Ford Heights was first settled in the late 1840s. It served as a stopping point on the Underground Railroad for runaway slaves fleeing to freedom. By the early 20th century, the area had developed into an agricultural community of farms operated mostly by Poles, Lithuanians, and Italians. After World War I, African Americans from the Southern U.S. migrated to the area and worked on the farms.

A new subdivision known as the "Park Addition" was created on a farm road from Chicago Heights to Indiana, and it attracted residents to the area during the early 1920s. In 1924, 40 families successfully petitioned for electrical service. Soon after, the main east-west road became a two-lane concrete highway designated as U.S. Route 30, part of the transcontinental Lincoln Highway. By the 1930s, the Park Addition had telephone service and was known as East Chicago Heights. During the 1940s, Alberta Armstrong and others organized both black and white women in the community to raise funds for a new fire truck. By 1948, they had become the East Chicago Heights Citizens Association.

East Chicago Heights was incorporated as a village in 1949. In the 1950 census, 1,548 people lived in the village – 76.9% of whom were black. The Ford Motor Company opened a stamping plant adjacent to the village in 1956. The company offered minorities an equal opportunity for well-paying jobs, and East Chicago Heights developed into a blue-collar community inhabited mostly by middle-class black families whose housing choices in suburban Chicago were severely limited at that time. The village's population more than doubled to 3,270 by 1960. That growth continued throughout the decade, with one of the biggest successes being the Sunnyfield subdivision, which opened in 1964 and became one of the most popular neighborhoods in East Chicago Heights.

Towards the end of the 1960s, over 60 acres (24 ha) of housing deemed substandard were cleared and replaced by federally subsidized public housing. These developments attracted lower income residents to East Chicago Heights, which strained the village's resources, already limited by little commercial activity and a small tax base. The population rose to 5,000 in 1970 and peaked at 5,347 in 1980. In an attempt to annex the unincorporated site of the Ford Stamping Plant, the village of East Chicago Heights changed its name to Ford Heights in 1987. The move was unsuccessful, and the land eventually was annexed by the neighboring city of Chicago Heights.

Often viewed as one of Chicago's most impoverished suburbs and at one point the poorest suburb in the United States, Ford Heights has experienced high levels of political corruption, decaying infrastructure, and an elevated crime rate. In 2008, the Cook County Sheriff's Department took over law enforcement duties for the village. Between 1980 and 2010, the population of Ford Heights declined by more than 48%.

There were 984 households out of which 48.6% had children under the age of 18 living with them, 21.5% were married couples living together, 49.3% had a female householder with no husband present, and 20.8% were non-families. 18.8% of all households were made up of individuals and 4.7% had someone living alone who was 65 years of age or older. The average household size was 3.51 and the average family size was 3.98. 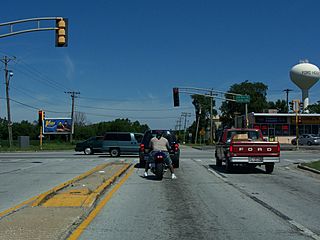 US 30 in Ford Heights

All content from Kiddle encyclopedia articles (including the article images and facts) can be freely used under Attribution-ShareAlike license, unless stated otherwise. Cite this article:
Ford Heights, Illinois Facts for Kids. Kiddle Encyclopedia.