Forest Hill War Memorial is a heritage-listed memorial at Gordon Street, Forest Hill, Lockyer Valley Region, Queensland. Australia. It was built in 1921. It is also known as Forest Hill Soldiers Memorial. It was added to the Queensland Heritage Register on 21 October 1992.

The township of Forest Hill developed during the 1890s, following the repurchase by the Queensland Government of 6,000 acres (2,400 ha) from the Rosewood station. Although the Ipswich to Toowoomba railway had been surveyed between Laidley and Gatton in 1865, it was not until c. 1881 that a siding was established in the Forest Hill area. Originally known as Boyd's siding, it was shifted to the site of the present Forest Hill railway station c. 1887. As the surrounding country was progressively opened and settled by farmers, Forest Hill became a busy transport centre for agricultural produce, often requiring special trains to be run from Forest Hill.

The masons for the monument were PJ Lowther and Sons of Brisbane, who were also responsible for memorials in Brisbane (the pedestal for the South African memorial), Blackbutt, Murgon, Goodna, Mount Perry and Tiaro. It is possible that the monument was actually carved by Charles Lowther, sculptor son of this Brisbane masonry family, and an ex-serviceman who fought with the Australian Light Horse in the First World War.

The monument cost £300, and was unveiled by five mothers of fallen soldiers. A plate with the names of World War II servicemen was added at a later stage. 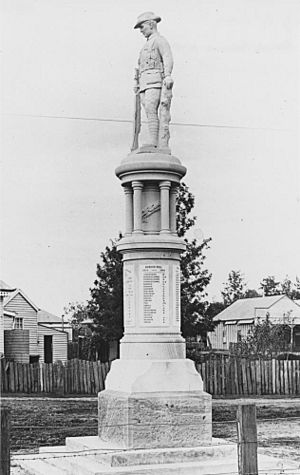 The Forest Hill War Memorial is located in a small park at the end of Victoria Street, completing a vista down the town's main street. The finely carved memorial stands approximately four and a half metres high, and consists of a life-size grey sandstone Digger statue on a tall sandstone pedestal. The statue faces eastwards, in the direction of an adjacent steel flagstaff. The site is marked out with small steel fence posts and chains.

The pedestal rests on a plinth of blocked rusticated brown sandstone on a stepped concrete base. The lower portion of the pedestal is columnar, with leaded marble plaques, and rests on a block with shaped corners. The upper portion has a central wreathed column surrounded by colonnettes, and the statue is mounted on rounded base which caps the colonnettes.

The memorial contributes to the townscape of Forest Hill in its axial location at the end of the main street.

Forest Hill War Memorial was listed on the Queensland Heritage Register on 21 October 1992 having satisfied the following criteria.

The Forest Hill War Memorial is important in demonstrating the pattern of Queensland's history as evidence of an era of widespread expression of Australian patriotism and nationalism, during and following the First World War.

As a "Digger" statue, it demonstrates the principal characteristics of a commemorative structure erected as an enduring record of a major historical event.

It exhibits aesthetic characteristics which are valued by the community, in particular the fine craft work of the sandstone carving and the aesthetic contribution of the monument to the townscape of Forest Hill in a vista down the main street.

It has a strong association with the community as evidence of the impact of a major historical event.

All content from Kiddle encyclopedia articles (including the article images and facts) can be freely used under Attribution-ShareAlike license, unless stated otherwise. Cite this article:
Forest Hill War Memorial Facts for Kids. Kiddle Encyclopedia.