Fort Guijarros (Spanish "Castillo de Guijarros" ) was a Spanish fort in what is now San Diego, California, USA. Its name means "Fort Cobblestones" in English. It was built in 1797 on Ballast Point as the first defensive fortifications for San Diego Bay. It was involved in the Battle of San Diego, a naval battle between the fort and an American trading vessel. The site is registered as California Historical Landmark #69. 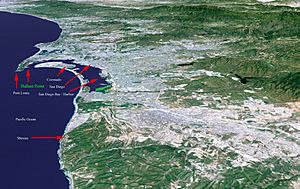 Fort Guijarros was made out of adobe and it had ten cannons mounted in gun emplacements. At least two of the guns survive. One of them, "El Jupiter", can be seen at Fort Stockton. "El Capitan" is located in Old Town Plaza in San Diego.

The fort was built in 1797 as the first defensive fortifications for San Diego harbor. It commanded the entrance to San Diego Bay from a rise at the base of Ballast Point at Point Loma. In 1796 the Spanish named the point "Punta de los Guijarros", which means "point of the cobblestones". The fort's English name is "Fort Cobblestones". The point derived the name Ballast Point from the fact that the early Yankee skippers would have stones gathered from Ballast Point to serve as ballast in their ships during their returns around Cape Horn to their home town, Boston. 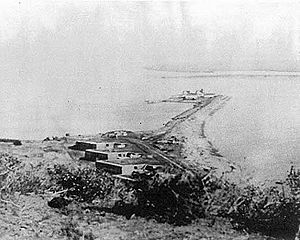 View from Point Loma looking East over Fort Rosecrans and Ballast Point. The ruins of Fort Guijarros would be to the right of the largest gun battery of Fort Rosecrans, Battery Wilkeson.

The ten guns of the fort were fired in action only twice. The first time was in 1803 during the Battle of San Diego. The Spanish had detained the American brig Lelia Byrd in San Diego Harbor for smuggling otter skins. The ship's crew overpowered their Spanish captors and were headed out of the harbor when the guns of the fort sought to prevent her escape. Fire from the Lelia Byrd's guns drove the fort's gunners to seek cover.

The fort again fired on an American smuggler in 1828. This time, the fort was under Mexican control and the vessel was the Franklin.

In 1846, during the Mexican American War, the American ship USS Cyane landed American Marines at nearby La Playa. The marines took abandoned guns from Fort Guijarros and used them to lay siege to Old Town San Diego.

All content from Kiddle encyclopedia articles (including the article images and facts) can be freely used under Attribution-ShareAlike license, unless stated otherwise. Cite this article:
Fort Guijarros Facts for Kids. Kiddle Encyclopedia.