Kids Encyclopedia Facts
This page is about the former military installation. For the 2014 film, see Fort Tilden (film). 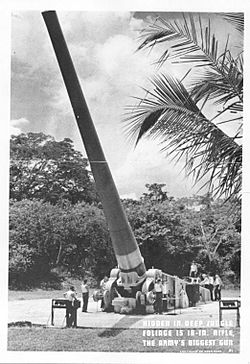 A 16-inch gun in Panama, generally similar to the original installations at Fort Tilden in the 1920s.

Fort Tilden, also known as Fort Tilden Historic District, is a former United States Army installation on the coast in the New York City borough of Queens. Fort Tilden now forms part of the Gateway National Recreation Area, and is administered by the National Park Service.

Fort Tilden Historic District is located on the Rockaway Peninsula, between Jacob Riis Park to the east and Breezy Point Tip to the west. All three of these sites are operated by the National Park Service.

Fort Tilden in 2014 has largely become a natural area of beach, dunes and maritime forest. Most of the old military installations are abandoned, and military structures which formerly housed artillery (batteries) and ammunition (magazines) are covered in graffiti. A few buildings have been renovated and are used by local arts groups, and some large open areas are used as sports grounds. Atop one of the old batteries, Battery Harris East, a viewing platform has 360-degree views, which include the city, New York Harbor, and the Atlantic Ocean. The wilder parts of Fort Tilden are popular with bird-watchers and other nature-lovers, and the beach areas are frequently used for fishing. 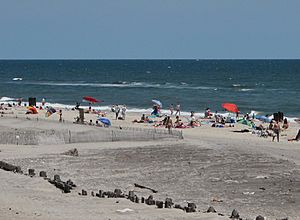 A view of the beach at Fort Tilden

Fort Tilden is an important nesting area for the threatened Piping Plover, a species which NPS—as part of a large global effort—is working to protect. The eggs and chicks are very small and highly camouflaged, so they are extremely difficult to see. It is very easy to step on the eggs and kill the unhatched chicks. "Under New York and Federal laws persons may be arrested and fined for killing, harassing, teasing, or in any way disturbing birds nesting in this area." Keep out of areas delineated by string fences and signs.

Common Terns and Least Terns also make their nests on the beach at Fort Tilden. These two species are threatened in New York State as well.

Do not: feed, come within 15 feet, disturb or harass wild animals. Take walks on the beach on the wet sand, and not the sand close to the vegetation. Do not enter bird nesting areas. Report violations to the U.S. Park Police: 718-338-3988.

Historic gun batteries and other military fortifications are closed to the public. Some of these historic structures are very hazardous.

The fort first served as a coast artillery installation and ended its service as a Nike Hercules and Nike Ajax missile site.

Following a number of temporary military installations on or near the location dating as far back as the War of 1812, the fort was established as Camp Rockaway Beach shortly after the time of American involvement in World War I in April 1917. It is named after Samuel J. Tilden, one-term Governor of New York State and Democratic Presidential candidate in 1876.

In 1917, the first weapons deployed by the United States Army Coast Artillery Corps at Fort Tilden were an unnamed battery of four 12-inch coast defense mortars and two batteries of two 6-inch M1900 guns on pedestal mounts, Battery Kessler and Battery East (renamed Battery Fergusson in 1939). The mortars were adjacent to Naval Air Station Rockaway, potentially causing damage there if fired, and in 1919-1920 were replaced with railway mortars which could be moved away from the air station for firing. The original mortars were taken from Battery Piper at Fort Hamilton in Brooklyn, and the six-inch guns from Battery Burke at Fort Hamilton and Battery Kinney at Fort Slocum on Davids' Island. The fort became part of the Harbor Defenses of Southern New York, joining Fort Hamilton and Fort Wadsworth on Staten Island. The railway mortars and their tracks were probably removed in 1921 to make room for Battery Harris (not 1919 as most sources state).

In March 1921 construction began on Battery Harris with two 16-inch M1919 guns. The New York area was among the first locations in the United States to be defended by this new gun, the most powerful weapon in the United States' arsenal at the time. The battery was accepted for service in December 1924. The guns were originally mounted in the open and connected by a railway system to deliver ammunition. The battery was named for Henry Leavenworth Harris, a career Army officer who died in 1920. In 1918-1919 a battery of two 3-inch antiaircraft guns was also built at the fort. A third gun was added to this battery in 1938.

In 1941-42 Battery Harris was casemated with the massive concrete bunker that remains today. The bunker connecting the guns contained ammunition magazines and fire control facilities. The bunker was mainly constructed to provide protection against air attack. Fort Tilden was supplemented during the war with another 16-inch gun battery at the Highlands Military Reservation near Navesink, New Jersey. The pair of 16-inch batteries superseded all of the older heavy guns defending New York, and these were scrapped in 1942-44. Additional 16-inch batteries were proposed for Fort Wadsworth and a location that is now part of JFK Airport, but these were not built.

Several smaller batteries were built in and near Fort Tilden during the war. Battery 220 was completed but not armed; it was primarily an ammunition bunker for two 6-inch guns that were never delivered. Four Anti-Motor Torpedo Boat (AMTB) batteries were built during the war, two each at Norton Point and Rockaway Point (aka Breezy Point). Norton Point had AMTB 18 with four 3-inch M1902 guns and AMTB 19 with four 90 mm dual-purpose guns. The 3-inch guns were all on pedestal mounts; the 90 mm AMTB batteries were authorized two fixed guns and two towed guns. Rockaway Point had AMTB 20 with two 3-inch M1902 guns and AMTB 21 with four 90 mm guns. All six 3-inch guns for these batteries came from Battery Catlin at Fort Wadsworth, and AMTB 18 was also called Battery New Catlin.

After the war it was determined that gun defenses were obsolete, and Fort Tilden was disarmed, with all guns scrapped in 1948.

In 1955 the AA guns were replaced by a Nike-Ajax missile site called NY-49. A photograph shows at least two launch sites with six rails each were at Fort Tilden. These were converted to the nuclear-capable Nike-Hercules missile in 1958. The Nike-Hercules system was deactivated throughout the US in 1972.

From the late 1960s until at least 1978, Fort Tilden was an Army Reserve Post, housing a Signal Corps unit, the 411th Engineer Brigade, and an Army Reserve self-propelled 8" howitzer battalion, originally the 5/51st Field Artillery (FA) and renamed in the early 70's the 7/9th FA. From the late 1960s until the 1980s, Fort Tilden served as a United States Army Reserve post, with the 187th Infantry Brigade's 5/5th FA; a towed 105 mm howitzer battalion stationed there until the 187th was deactivated in 1995. Fort Tilden was also the location of the 411th Engineer Brigade, which was headquartered there from 1968 to 1978.

Fort Tilden remained an Army installation until the late 1970s, when it was decommissioned and turned over to the National Park Service, and made part of the Gateway National Recreation Area. A number of structures are included in an historic district listed on the National Register of Historic Places, including the two concrete casemates for the 16"/50 caliber M1919 guns of Battery Harris.

All content from Kiddle encyclopedia articles (including the article images and facts) can be freely used under Attribution-ShareAlike license, unless stated otherwise. Cite this article:
Fort Tilden Facts for Kids. Kiddle Encyclopedia.