Fountain was built in 1859 as a railroad shipping center for local ranches and farms. The town was named for Fountain Creek, and was incorporated in 1900.

In 1999, Fountain was chosen as "America's Millennium City" by the New York Times. Fountain was named an "All-America City" in 2002 by the National Civic League. The city is the home of Pikes Peak International Raceway. 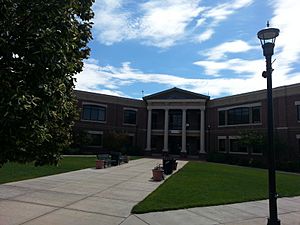 A tremendous train wreck, "The Blast", as it is now known, occurred in Fountain during the spring of 1888. Just after three in the morning on May 14, 1888, a freight train carrying eighteen tons of explosives and a passenger train collided in the city. The accident killed three people: Charles F. Smith, a Fountain lumber dealer originally from Keokuk, Iowa, Henry Hutchins, a Fountain merchant and Mrs. Sarah Widrig a local hat maker from Fountain.

The blast from the collision created a very loud explosion that could be heard from miles away. The crash destroyed a nearby church, a grocery store and created a large crater in the ground forty feet in diameter and fifteen feet deep.

The cause of the wreck was attributed to a pair of unruly vagrants who were kicked off of the freight train north of Fountain in Colorado Springs.

"The Blast" remains a legendary event in the city's history. It is commemorated with an annual street dance held at Fountain's City Hall Plaza each July.

Fountain has a municipal run bus that links the city with Pikes Peak Community College. Fountain is also part of the Bustang network, which provides it intercity transportation. It is along the Lamar-Pueblo-Colorado Springs Outrider line.

All content from Kiddle encyclopedia articles (including the article images and facts) can be freely used under Attribution-ShareAlike license, unless stated otherwise. Cite this article:
Fountain, Colorado Facts for Kids. Kiddle Encyclopedia.