Franklin Ramón Chang Díaz (April 5, 1950) is a Costa Rican American mechanical engineer, physicist and former NASA astronaut. He is the sole founder and CEO of Ad Astra Rocket Company as well as a member of Cummins' board of directors. He became an American citizen in 1977. He is of Costa Rican Spanish (maternal side) and Chinese (paternal side) descent.

He is a veteran of seven Space Shuttle missions, tying the record, as of 2021 for the most spaceflights (a record set by Jerry L. Ross). He was the third Latin American, but the first Latin American immigrant NASA Astronaut selected to go into space. Chang Díaz is a member of the NASA Astronaut Hall of Fame.

Franklin Ramón Chang Díaz was born in San José, Costa Rica on April 5, 1950 to a Costa Rican father of Chinese descent, Ramón Ángel Chang Morales, an oil worker whose own father fled China during the Boxer Rebellion. His mother is also Costa Rican, María Eugenia Díaz Romero. One of six children, he has a younger sister, Sonia Rosa (born December 1952) and his mother, brothers and sisters live in Portland. His elder daughters are Jean Elizabeth (born December 1973) and Sonia Rosa (born March 1978) who is a member of the Massachusetts Senate. He married in the United States, on 17 December 1984, Dr. Peggy Marguerite Doncaster (née Stafford, of Alexandria, Louisiana), and his younger daughters are Lidia Aurora (born March 1988) and Miranda Karina (July 1995), both born in Houston, Texas.

He graduated from Colegio de La Salle in San Jose with an "A" in November 1967, then moved to the United States to finish his high school education at Hartford Public High School in Connecticut, in 1969. He went on to attend the University of Connecticut, where he earned a B.S. degree in mechanical engineering and joined the federal TRIO Student Support Services program in 1973. He then attended the Massachusetts Institute of Technology (MIT), where he earned a Ph.D. degree in applied plasma physics in 1977. For his graduate research at MIT, Chang Díaz worked in the field of fusion technology and plasma-based rocket propulsion.

After leaving NASA, Chang Díaz set up the Ad Astra Rocket Company, which became dedicated to the development of advanced plasma rocket propulsion technology. Years of research and development have produced the Variable Specific Impulse Magnetoplasma Rocket (VASIMR), an electrical propulsion device for use in space. With a flexible mode of operation, the rocket can achieve very high exhaust speeds, and with a sufficiently powerful electrical supply even has the theoretical capability to take a crewed rocket to Mars in 39 days.

Chang Díaz also is active in environmental protection and raising awareness about climate change, notably in his role in Odyssey 2050 The Movie in which he encourages young people to get motivated about environmental issues. 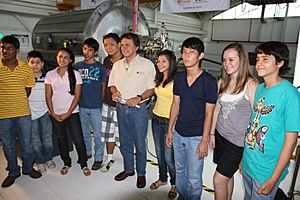 Dr. Chang with students during the filming of Odyssey 2050 The Movie at Ad Astra Rocket Company. (2010)

In addition, Chang Díaz is an Adjunct Professor in Physics and Astronomy at Rice University. He has been on the board of directors of Cummins since Dec 08, 2009.

In 1986, Franklin Chang Díaz was one of twelve recipients of the Medal of Liberty. He was inducted into the NASA Astronaut Hall of Fame on May 5, 2012 in a ceremony that took place in the Kennedy Space Center Visitor Complex. Also, due to his career and scientific success, he has been decorated multiple times in Costa Rica and named Honor Citizen by the national legislature. The Costa Rican National High Technology Center (CeNAT), among other institutions, is named after him. In 2014, Chang Díaz was awarded the "Buzz Aldrin Quadrennial Space Award" by The Explorers Club. Buzz Aldrin, whom Chang Díaz called a childhood hero, presented the award.

All content from Kiddle encyclopedia articles (including the article images and facts) can be freely used under Attribution-ShareAlike license, unless stated otherwise. Cite this article:
Franklin Chang Díaz Facts for Kids. Kiddle Encyclopedia.