Franz Josef Strauß (6 September 6 1915 – 3 October 1988) was a German politician (CSU) and minister-president of the state of Bavaria. Press reports called him the "Strong Man of Europe".

Born as Franz Strauß in Munich as the second child of a butcher. Strauß studied at the University of Munich from 1935 to 1939.

He became a member of the NSDStB (Nationalsozialistischer Deutscher Studentenbund), (English: National Socialist German Students' League). All students had to be members, or they would not be allowed to study.

In World War II, he served in the German army, on the Western and Eastern Fronts. While on furlough, he passed the German state exams to become a teacher. He got severe frostbite on the Eastern Front at the end of 1942, so he became an Offizier für wehrgeistige Führung (political officer) at the anti-aircraft artillery school in Altenstadt, near Schongau, Bavaria.

Soon after the war he changed his name to Franz Josef Strauß.

After the war, he was appointed deputy Landrat (county president) of Schongau by the American army, and helped to found the local CSU there.

Rivalry between Kohl and Strauß

Strauß became minister of finance in 1966, in the cabinet of Kurt Georg Kiesinger.

He worked with the SPD minister for economy, Karl Schiller, but after the SPD was able to form a government without the CDU/CSU, in 1969, Strauß lost his job and became a critic of Willy Brandt's Ostpolitik.

In 1976, when Helmut Kohl failed to become chancellor Strauß cancelled the alliance between the CDU and CSU parties in the Bundestag. He only started the alliance again when the CDU threatened to move into Bavaria.

In the 1980 federal election Strauß was the CDU/CSU candidate for chancellor. Some people thought that this showed that the CDU and CSU leaders thought Strauß had better policies and style than Kohl. Others said that the CDU/CSU thought that Helmut Schmidt and the SPD was bound to win the 1980 election, and felt that they had nothing to lose in running Strauß: but it might stop Strauß criticising anyone whon disagreed with him.

After he lost the 1980 federal election, he left federal politics. But he did not stay quiet, and often commented on federal affairs from his safe seat in Bavaria. He especially criticised Kohl's ideas, even after Kohl ascended to the Chancellorship.

In 1983, Strauß helped to arrange a loan of 3 billion Deutschmarks for East Germany. This was not popular, and today it is regarded by some as having artificially prolonged the life of the then-bankrupt communist state.

Strauß visited communist Albania on 21 August 1984, while Enver Hoxha, the absolute dictator from the end of World War II until his death in 1985, was still alive. Strauß was one of the few Western leaders to visit Albania in decades. Some thought Strauß might be helping to start diplomatic links between Albania and West Germany but the visit did not result in anything concrete. 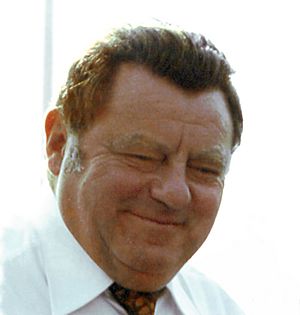 On 1 October 1988, Strauß collapsed while hunting with the Prince of Thurn and Taxis in the Thurn and Taxis forests, east of Regensburg. He died in a Regensburg hospital on October 3 without having regained consciousness.

Strauß was very important in post-war Germany even though he was not very well known outside Germany. He polarized (split) the public like few other politicians.

A well known spokesman for conservatives, and brilliant speech-maaker, he was a "red flag" to the left (his ideas made left wing people very angry).

He helped transform Bavaria from a farming state to a centre of technology in Germany. He was an aerospace enthusiast, and supported the Airbus in the 1970s. This is why the new airport in Munich was named after him in 1992 (see Franz Josef Strauß International Airport).

All content from Kiddle encyclopedia articles (including the article images and facts) can be freely used under Attribution-ShareAlike license, unless stated otherwise. Cite this article:
Franz Josef Strauß Facts for Kids. Kiddle Encyclopedia.