Friedrich Hund (4 February 1896 – 31 March 1997) was a German physicist from Karlsruhe known for his work on atoms and molecules. He worked at the Universities of Rostock, Leipzig, Jena, Frankfurt am Main, Göttingen and was a member of the International Academy of Quantum Molecular Science.

He had published more than 250 papers and essays and made contributions to quantum theory about the structure of the atom and the structure of molecular spectra. The Hund's rule was named after him and in 1926 he discovered the later so-called tunneling effect. 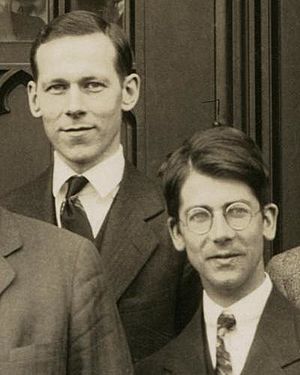 Hund worked with well known physicists as Schrödinger, Dirac, Heisenberg, Max Born, and Walter Bothe. At that time, he was Born's assistant, working with quantum mechanics.

After his studies of mathematics, physics, and geography in Marburg and Göttingen, he worked as a private lecturer in theoretical physics at Göttingen in 1925, professor at Rostock in 1927, Leipzig in 1929, Jena in 1946, Frankfurt/Main in 1951 and from 1957 again in Göttingen. Additionally he stayed in Copenhagen (1926) with Niels Bohr and lectured on the atom at Harvard University, Cambridge, Massachusetts in 1928.

Friedrich Hund became an honorary citizen of Jena, and a street in Jena was named after him. Since June 2004, a part of the new building of the Physics Department was given the Friedrich-Hund-Platz 1 address. The same name was chosen for the Institute for Theoretical Physics at the University of Göttingen.

The Hund's cases, which are particular regimes in molecular angular momentum coupling, and the Hund's rules, which govern electron configurations, are important in spectroscopy and quantum chemistry. In chemistry, the first of Hund's rules is especially important and is often referred to as simply Hund's rule.

All content from Kiddle encyclopedia articles (including the article images and facts) can be freely used under Attribution-ShareAlike license, unless stated otherwise. Cite this article:
Friedrich Hund Facts for Kids. Kiddle Encyclopedia.