In October 1950, the Parks Bureau purchased an 87-acre (350,000 m2) tract of land featuring two small creeks and wooded areas between Vermont and Canby Streets for $120,000. The land had been bought in 1890 by a Swiss immigrant named Ulrich Gabriel, who farmed this land and operated the Pine Creek Dairy as well. In July 1995, Portland Parks & Recreation offered a 1.75-acre (7,100 m2) dog off-leash area on a six-month trial basis in Gabriel Park. The Southwest Community Center was funded by Measure 26-10 and opened in June 1999.

The park costs the city approximately $231,000 per year in maintenance. 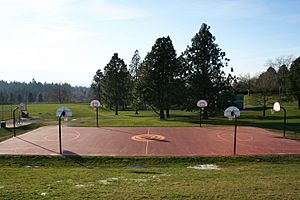 Basketball Courts inside the park

In November 2006, Portland Parks & Recreation Commissioner Dan Saltzman recommended funding for the construction of a skatepark at Gabriel Park. Later that month, the City Council approved the funding for the Gabriel Park Skatepark along with another skatepark at Ed Benedict Park in Southeast Portland. The skateparks grand opening was July 12, 2008. The design and construction of the park was done by Airspeed Skateparks of Reedsport, Oregon.

All content from Kiddle encyclopedia articles (including the article images and facts) can be freely used under Attribution-ShareAlike license, unless stated otherwise. Cite this article:
Gabriel Park Facts for Kids. Kiddle Encyclopedia.