Reedsport is a city in Douglas County, Oregon, United States. As of the 2020 census, the population was 4,310.

Reedsport was established on the estuary of the Umpqua River on January 7, 1852. It was named for a local settler, Alfred W. Reed, who founded the city in 1912. The post office was established July 17, 1912.

The building of Southern Pacific Railroad lines extending south to Coos Bay led to the development of Reedsport. Before the post office was established in 1912, Reedsport was a camp for railroad construction workers.

Built on marshy ground, for much of its history Reedsport has struggled with frequent flooding; most of its early buildings were elevated 3 to 8 feet (0.9 to 2.4 m) above ground. After a devastating flood in 1964, a dike was constructed to protect the lower town. During this flood, the waters reached the fish hatchery and overflowed the fish troughs allowing hundreds of thousands of smallmouth bass to be introduced into the Umpqua River. According to fishing reports small-mouth bass became the most abundant fish in the river. Every few years, high water induces city employees to close the dikes to prevent low-lying areas of the city from flooding.

In the last quarter of the 20th century, Reedsport struggled with the collapse of the Oregon timber industry. In the last two decades, Reedsport has seen an increase of tourism. Part of this is due to its close proximity to the fishing of the Umpqua River. Another part of the recent surge in tourism is due to the sand dunes that are near Reedsport.

Although the U.S. Forest Service maintains a local office in the town, Reedsport's historic connection with the timber industry ended in 1999 with the closing of the International Paper plant in nearby Gardiner.

Recently, Reedsport has seen a rise in tourism due to recreation at the nearby Oregon Dunes National Recreation Area in Winchester Bay. A number of businesses catering to all-terrain vehicles have opened in Reedsport to serve the needs of this growing activity. 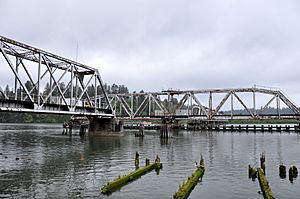 Railway bridge over the Umpqua River at Reedsport

There were 1,948 households, of which 20.3% had children under the age of 18 living with them, 44.8% were married couples living together, 8.9% had a female householder with no husband present, 4.8% had a male householder with no wife present, and 41.6% were non-families. 35.5% of all households were made up of individuals, and 18% had someone living alone who was 65 years of age or older. The average household size was 2.11 and the average family size was 2.68.

The Oregon Divisional Chainsaw Sculpting Championships was started in 1999 and held every year since 2000 at the Rainbow Plaza over Fathers Day Weekend. Chainsaw Carvers from three continents compete at the event.

The Umpqua Discovery Center, along the Umpqua River in downtown Reedsport, features regional natural and cultural history information, including interactive media and displays.

The Dean Creek Wildlife Area is 3 miles (5 km) east of Reedsport on Oregon Route 38. This 1,000-acre (4 km2) preserve jointly managed by the Bureau of Land Management and the Oregon Department of Fish and Wildlife provides an opportunity to view 60 to 100 Roosevelt elk in their natural habitat year round.

The Oregon Dunes National Recreation Area interpretive center is located at the intersection of Oregon Route 38 and U.S. Route 101. It features interpretive panels, short films, and information about the local area and attractions.

Plans for a 100-buoy commercial wave park in the ocean near Reedsport fell through in 2014, when Ocean Power Technologies (OPT), a renewable energy company based in New Jersey, abandoned the project. The park, which would have been built in an area known for high-value fishing and crabbing, was opposed by the Oregon Dungeness Crab Commission. OPT listed high costs, technical challenges, and complicated negotiations with governments and stakeholders among its reasons for cancelling the project. As of 2014, OPT still had plans for a much smaller project near Reedsport.

All content from Kiddle encyclopedia articles (including the article images and facts) can be freely used under Attribution-ShareAlike license, unless stated otherwise. Cite this article:
Reedsport, Oregon Facts for Kids. Kiddle Encyclopedia.