Garber is a city in Garfield County, Oklahoma, United States. The population was 822 at the 2010 census. The city is named after Martin Garber, father of Milton C. Garber, former U.S. congressman, Enid mayor, newspaper editor, and judge. The land was previously part of the Cherokee Outlet, until the U.S. government declared it open to non-Indian settlement in 1893.

The Garber family participated in the Land Run of 1893, claiming 160 acres (0.65 km2) of land that would become the city of Garber. The Enid & Tonkawa Railway built a line in 1899 that ran from North Enid to Billings, near the brothers' land. In October 1899, the Garber Town Company, owned by brothers Milton C. and Burton A. Garber, platted the town. Burton Garber was part-owner of the Garber Oil Company.

Garber is located in eastern Garfield County, 19 miles (31 km) east of Enid, the county seat. Oklahoma State Highways 15 and 74 pass together through the west side of the city, with Highway 74 leading north 18 miles (29 km) to Lamont and south 9 miles (14 km) to Covington. Highway 15 leads south and west to Enid, and north and east 15 miles (24 km) to Billings.

According to the United States Census Bureau, Garber has a total area of 0.50 square miles (1.3 km2), all of it land. 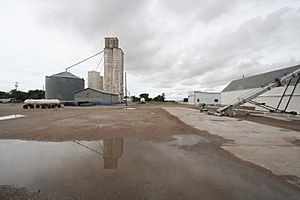 There were 360 households, out of which 28.3% had children under the age of 18 living with them, 53.1% were married couples living together, 10.8% had a female householder with no husband present, and 32.2% were non-families. 31.1% of all households were made up of individuals, and 16.7% had someone living alone who was 65 years of age or older. The average household size was 2.35 and the average family size was 2.93.

All content from Kiddle encyclopedia articles (including the article images and facts) can be freely used under Attribution-ShareAlike license, unless stated otherwise. Cite this article:
Garber, Oklahoma Facts for Kids. Kiddle Encyclopedia.