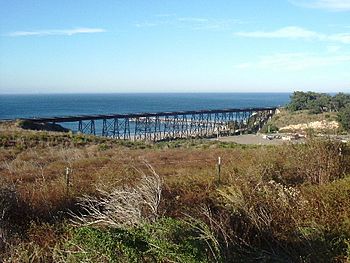 Gaviota (Spanish for "Seagull") is an unincorporated community in Santa Barbara County, California on the Gaviota Coast about 30 miles (48 km) west of Santa Barbara and 15 miles (24 km) south of Buellton.

Industries include organic farming, ranching, and woodworking. Free range cattle can be seen roaming and grazing throughout the area. Gaviota is also home to a marine mammal rehabilitation center named The Channel Islands Marine & Wildlife Institute (CIMWI.org) which opened in 2006 at the historic Vista Del Mar School grounds.

Gaviota was once the location of the Gaviota Marine Terminal, which is currently being decommissioned and abandoned, with intent to become public open space. On the mountain side of the freeway is the Gaviota Oil Heating Facility, also known as the "Gaviota Gas Plant", built by Chevron Corp. and currently owned by Plains Exploration & Production Company (PXP); this facility is being reconfigured and partially abandoned. The former purpose of the facility was to heat and process the heavy crude oil produced offshore so that it could flow through the All American Pipeline to refineries in the Bakersfield area.

The Gaviota Coast remains largely undeveloped and is the longest remaining rural coastline in southern California. In 2016, the twenty-one miles of Highway 101 that runs through the Gaviota Coast, bounded by the City of Goleta’s western boundary and Las Cruces where Route 1, was declared a State Scenic Highway. The preservation of this area is the subject of "The Twenty," a film by The Surfrider Foundation.

The first European land exploration of Alta California, the Spanish Portolà expedition, camped at Gaviota Creek on August 24, 1769 (on its way north). On the return journey to San Diego, the party again stopped there on January 6, 1770. Franciscan missionary Juan Crespi noted in his diary, "I called this place San Luis Rey, and the soldiers know it as La Gaviota, because they killed a seagull there." Gaviota is the Spanish word for "seagull".

All content from Kiddle encyclopedia articles (including the article images and facts) can be freely used under Attribution-ShareAlike license, unless stated otherwise. Cite this article:
Gaviota, California Facts for Kids. Kiddle Encyclopedia.