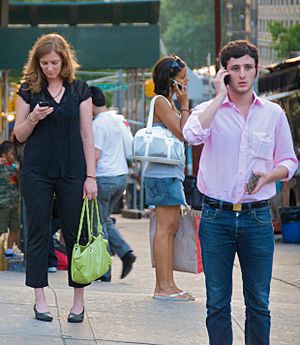 Three people who appear to be Millennials using smartphones.

Generation Y is made up of people born after Generation X. There are no exact dates for when Generation Y started and ended. But the time is roughly for births between the early 1980s to the mid-1990s or early 2000s. People in this generation are sometimes called Millennials. They are also called Echo Boomers because of the high birth rate during this period. The high birth rate almost matches that of the Baby Boom period after World War II.

Many information sources mention the Generation Y as people born between 1983 and early 2000s.

All content from Kiddle encyclopedia articles (including the article images and facts) can be freely used under Attribution-ShareAlike license, unless stated otherwise. Cite this article:
Generation Y Facts for Kids. Kiddle Encyclopedia.