Prof George Francis FitzGerald FRS FRSE (3 August 1851 – 22 February 1901) was an Irish professor of "natural and experimental philosophy" (i.e., physics) at Trinity College in Dublin, Ireland, during the last quarter of the 19th century. FitzGerald is known for his work in electromagnetic theory and for the Lorentz–FitzGerald contraction, which became an integral part of Einstein's special theory of relativity. A crater on the far side of the Moon is named for him, as is a building at Trinity College, Dublin.

Life and work in physics

FitzGerald was born at No. 19, Lower Mount Street in Dublin on 3 August 1851 to the Reverend William FitzGerald and his wife Anne Frances Stoney (sister of George Johnstone Stoney and Bindon Blood Stoney). Professor of Moral Philosophy in Trinity and vicar of St Anne's, Dawson Street, at the time of his son's birth, William FitzGerald was consecrated Bishop of Cork, Cloyne and Ross in 1857 and translated to Killaloe and Clonfert in 1862. George returned to Dublin and entered Trinity as a student at the age of 16. He became a Fellow of Trinity in 1877 and spent the rest of his career at this college, becoming Erasmus Smith's Professor of Natural and Experimental Philosophy in 1881.

Along with Oliver Lodge, Oliver Heaviside and Heinrich Hertz, FitzGerald was a leading figure among the group of "Maxwellians" who revised, extended, clarified, and confirmed James Clerk Maxwell's mathematical theories of the electromagnetic field during the late 1870s and the 1880s.

In 1883, following from Maxwell's equations, FitzGerald was the first to suggest a device for producing rapidly oscillating electric currents to generate electromagnetic waves, a phenomenon which was first shown to exist experimentally by the German physicist Heinrich Hertz in 1888.

FitzGerald suffered from many digestive problems for much of his shortened life. He became very ill with stomach problems. He died at his home, 7 Ely Place in Dublin, shortly after an operation on a perforated ulcer on 21 February 1901. He is buried in Mount Jerome cemetery. 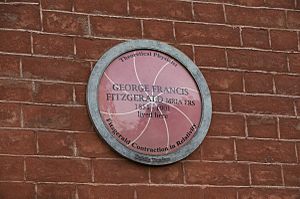 FitzGerald is better known for his conjecture in his short letter to the editor of Science titled "The Ether and the Earth's Atmosphere" (1889) that if all moving objects were foreshortened in the direction of their motion, it would account for the curious null-results of the Michelson–Morley experiment. FitzGerald based this idea in part on the way electromagnetic forces were known to be affected by motion. In particular, FitzGerald used some equations that had been derived a short time before by his friend the electrical engineer Oliver Heaviside. The Dutch physicist Hendrik Lorentz hit on a very similar idea in 1892 and developed it more fully into Lorentz transformations, in connection with his theory of electrons.

The Lorentz–FitzGerald contraction (or FitzGerald–Lorentz contraction) hypothesis became an essential part of the Special Theory of Relativity, as Albert Einstein published it in 1905. He demonstrated the kinematic nature of this effect, by deriving it from the principle of relativity and the constancy of the speed of light.

FitzGerald married, on 21 December 1885, Harriette Mary, daughter of the Reverend John Hewitt Jellett, Provost of Trinity College Dublin. He had eight children by her, three sons and five daughters.

FitzGerald, in common with others at the end of the nineteenth century, became obsessed with the desire to fly. His attempts in College Park, Dublin, in 1895 involved large numbers of students pulling tow-ropes attached to the Lilienthal glider, and attracted the attention of the people of Dublin, beyond the Nassau Street railings. FitzGerald took off his coat on these occasions, but retained his top hat, which was normal headgear for a Fellow at that time. The experiments were not crowned with success, and were eventually abandoned. The flying machine hung for many years in the Museum Building until an idle engineering student applied a match to the cord from which it was hanging. The flame travelled along the cord and consumed the glider before the helpless onlookers.

All content from Kiddle encyclopedia articles (including the article images and facts) can be freely used under Attribution-ShareAlike license, unless stated otherwise. Cite this article:
George Francis FitzGerald Facts for Kids. Kiddle Encyclopedia.