The Michelson–Morley experiment was a scientific experiment to find the presence and properties of a substance called aether. Aether was believed to fill empty space. The experiment was done by Albert Michelson and Edward Morley in 1887.

Since waves in water need something to move in (water) and sound waves do as well (air), it was believed that light also needed something to move in. Scientists in the 18th century named this substance "aether," after the Greek god of light. They believed that aether was all around us and that it also filled the vacuum of space. Michelson and Morley created this experiment to try and prove the theory that aether existed. They did this with a device called an interferometer. 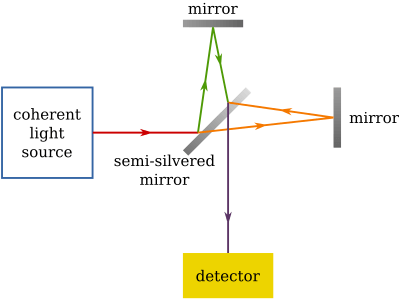 A Michelson interferometer uses the same in principle as the original experiment. But it uses a laser for a light source.

The interferometer was designed to measure the speed and direction of the "aether wind" by measuring the difference between the speed of light traveling in different directions. It measured this difference by shining a beam of light into a mirror that was only partially coated in silver. Part of the beam would be reflected one way, and the rest would go the other. Those two parts would then be reflected back to where they were split apart, and recombined. By looking at interference patterns in the recombined beam of light, any changes in speed because of aether wind could be seen.

They found that there was in fact no substantial difference in the measurements. This was puzzling to the scientific community at the time, and led to the creation of various new theories to explain the result. The most important was Albert Einstein's special theory of relativity.

All content from Kiddle encyclopedia articles (including the article images and facts) can be freely used under Attribution-ShareAlike license, unless stated otherwise. Cite this article:
Michelson–Morley experiment Facts for Kids. Kiddle Encyclopedia.