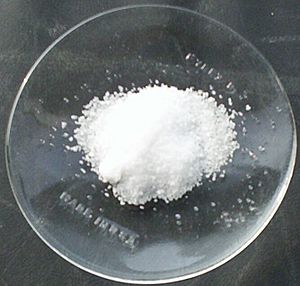 Lithium chloride is a chemical compound. Its chemical formula is LiCl. It contains lithium and chloride ions.

Lithium chloride can be made by igniting lithium and chlorine, but it is difficult because the reaction is violent. This makes the anhydrous (without water attached) form. Another way is mixing lithium oxide, lithium hydroxide, or lithium carbonate with hydrochloric acid. This makes the hydrate (water attached to the molecule). The hydrous form can be dried to the anhydrous form by heating it with hydrogen chloride gas.

Lithium chloride is somewhat toxic. It was going to be used as a salt substitute but people found that it is toxic. It affects the central nervous system.

All content from Kiddle encyclopedia articles (including the article images and facts) can be freely used under Attribution-ShareAlike license, unless stated otherwise. Cite this article:
Lithium chloride Facts for Kids. Kiddle Encyclopedia.