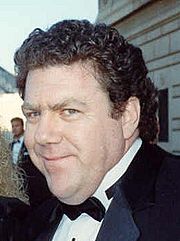 George Robert Wendt (born October 17, 1948 in Chicago, Illinois) is an American television, voice, stage and movie actor. He is known for his role as Norm Peterson in the comedy show Cheers. He has also appeared in Michael Jackson's music video Black or White. He hosted his own show, The George Wendt Show, before it was cancelled in April 1995. He is currently married to Bernadette Birkett since 1978 and have three children together and two step-children.

All content from Kiddle encyclopedia articles (including the article images and facts) can be freely used under Attribution-ShareAlike license, unless stated otherwise. Cite this article:
George Wendt Facts for Kids. Kiddle Encyclopedia.