George Worsley Adamson, RE, MCSD (7 February 1913 – 5 March 2005) was a book illustrator, writer, and cartoonist, who held American and British dual citizenship from 1931.

Adamson was born in the Bronx, New York City. His parents were George William Adamson, a master car builder for the Interborough Rapid Transit Company, and Mary Lydia (Lily, née Howard). His father, born in Glasgow, Scotland, and his mother, born in Wigan, Lancashire, had moved to New York City from Bombay in 1910.

Following the death of his mother in February 1921, George Adamson sailed to England with his father, his Aunt Florence, and his two sisters, Marie and Dorothy, on the Cunard liner RMS Caronia, landing at Liverpool on July 10. His father sailed back to New York in October 1921, where he died the following year.

George Adamson was educated at the Wigan Mining and Technical College and the Liverpool City School of Art, where he studied etching and engraving under Geoffrey Wedgwood RE. 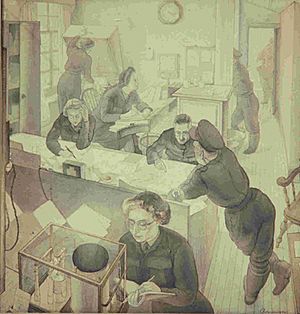 During World War II, Adamson served with the RAF Coastal Command as a navigator in Catalina flying boats on the Western Approaches and trained on B-24 Liberators in the Bahamas. After he illustrated a feature on transatlantic flights for the Illustrated London News, he was appointed an official war artist for the Coastal Command. Some of Adamson's drawings are now in the Imperial War Museum and the RAF Museum.

Between 1946 and 1953 Adamson taught engraving and illustration at Exeter School of Art, Exeter, Devon.

In 1954 he worked briefly in London with the designer John Morgan for the newly formed design group Byrne and Woudhuysen Limited (later Woudhuysen & Company Ltd), before setting himself up as a full-time illustrator and cartoonist.

The first book for which he did the drawings and dust-wrapper was Marjorie Vasey's The Day is Over (Epworth Press, 1954).

From the mid-1960s he illustrated Norman Hunter's Professor Branestawm books, providing a suitably zany continuity with W. Heath Robinson's illustrations from the 1930s. Also in the 1960s, Adamson painted the jackets for Alan Garner's first two novels for children: The Weirdstone of Brisingamen (1960) and The Moon of Gomrath (1963). In the same decade Adamson did the drawings for the first book of poems Ted Hughes wrote for children: Meet My Folks! (1961); this was followed by the drawings he did for Ted Hughes's first book of children's stories, How the Whale Became (1963), and those for the first edition of The Iron Man (1968).

Besides work for books, Adamson undertook commissions to illustrate articles in periodicals, among them the Listener and Nursing Times. For the latter he drew more than two hundred illustrations between 1963 and 1983.

Adamson published his first cartoon in Punch in September 1939 and his last in the Spectator in September 1994. Over the intervening fifty-five years his cartoons appeared not just in Punch but in the Tatler and Bystander, Time & Tide, the Peterborough column in the Daily Telegraph, Private Eye and other magazines.

One of the last things that happened under Hollowood's editorship was that Punch accepted a cover by George Adamson which showed Mr Punch sitting at an easel in the middle of a stretch of English countryside. Beside him was a book called How to Paint Like the Great Masters, and the landscape which Mr Punch was trying to paint was in fact modelled on the great masters… the Van Gogh trees on the right merged into a Samuel Palmer hillside, then into a Gainsborough or Constable field.

To make the landscape itself look like a collaboration between the masters was a brilliant idea.

At Liverpool City School of Art, Adamson developed what became a lifelong fascination with fine printing, especially dry-point, soft-ground etching and aquatint. In the early years after World War II he undertook several etchings for his own delight while teaching at Exeter School of Art.

Between his portrait of his two-year-old son Peter One Morning (completed in 1950) and Killerton from the North (1979), however, there was a gap of many years during which he pursued his career as illustrator and cartoonist. He went back to printmaking with great enthusiasm in the late 1970s, exhibiting his works both new and old at the Royal Society of Painter-Etchers and Engravers. Among his later prints are portraits of John Ogdon (1979) and Patricia Beer (1982).

George Adamson's work is held in several public collections, including the following:

This includes work as interior and cover illustrator.

Adamson was the winner of the P.G. Wodehouse Centenary Illustration Award in Punch in 1981 and was subsequently commissioned to illustrate an anthology of P.G. Wodehouse short stories for the Folio Society published in 1983.

George Adamson was elected a fellow of the Royal Society of Painter-Printmakers in 1987.

All content from Kiddle encyclopedia articles (including the article images and facts) can be freely used under Attribution-ShareAlike license, unless stated otherwise. Cite this article:
George Worsley Adamson Facts for Kids. Kiddle Encyclopedia.