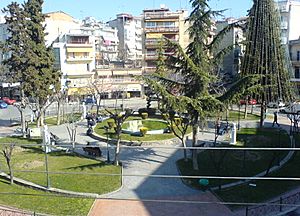 View of the main square of Giannitsa.

Giannitsa, former Genitsa, is a Greek town in the southeastern part of Pella Prefecture in the region of Macedonia. It has a total population of 26,296 inhabitants according to the 2001 census. It is located between Mount Paiko and the plain of Giannitsa, north of the area of the drain lake of Giannitsa at a high of 40 meters. It is also the most important and developed town in Pella and one the most important towns in Macedonia.

All content from Kiddle encyclopedia articles (including the article images and facts) can be freely used under Attribution-ShareAlike license, unless stated otherwise. Cite this article:
Giannitsa Facts for Kids. Kiddle Encyclopedia.