Giant Food of Maryland, LLC, also known as Giant, is an American supermarket chain with 169 stores and 159 full service pharmacies located in Delaware, Maryland, Virginia, and Washington, D.C. It is headquartered in an unincorporated area of Prince George's County, Maryland, in Landover

Giant is often known as Giant-Landover to avoid confusion with sibling company Giant-Carlisle. 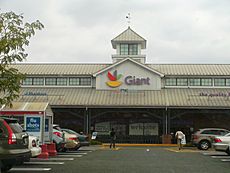 Giant was founded in 1936 by Nehemiah Meir "N.M." Cohen and Samuel Lehrman. The first store was at Georgia Avenue NW and Park Road NW in the District of Columbia.

Between 1950 and 1952, Giant added five new stores, joining in the general expansion of the American economy. At this time, the shopping center concept was taking hold in America and Giant put a new store in the Congressional Plaza Shopping Center in Rockville, Maryland.

In 1955 the chain opened its first store in Baltimore. By this time 48 percent of all its stores were located in shopping centers. In 1958, riding a new merchandising trend of combination supermarket/department stores, Giant opened its first Super Giant store and within a year had opened eight more. Also in 1958, the company opened its new headquarters and distribution center on a 40-acre site in Landover, Maryland.

In 1962, Giant opened its first combination food store and pharmacy located in Glen Burnie, Maryland, in the Southdale Shopping Center.

Israel "Izzy" Cohen inherited the family mantle in 1964 and built the company into the 12th-largest food chain in the United States.

Cohen died in 1995 at the age of 83. A holding company was formed because "none of the members of my family have had any experience or interest in operating Giant Food..." Three years after Cohen died, Giant was bought by Royal Ahold, a Dutch conglomerate. Ahold promised few changes to the chain, but Ahold was soon plunged into turmoil after a financial scandal. Starting in 1994, they expanded into the Philadelphia/Delaware/South Jersey area, but under the name Super G, as to avoid confusion with future sister chain Giant of Carlisle. In 2005, the decision was made to phase out the name and convert the South Jersey stores to the Stop & Shop banner; however, these stores did not perform well and they have since closed, sold to ShopRite franchises. The Delaware locations were converted to Giant-Landover, and the Pennsylvania locations, due to proximity to the Giant-Carlisle locations, were closed. 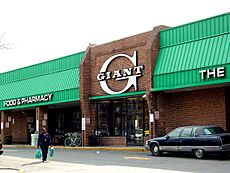 A Giant Food store in March 2006, located at 8th and O Streets NW in Washington, D.C.

In 2004, Ahold merged Giant and Stop & Shop and eliminated more than 600 positions at Giant's Landover headquarters, creating Stop & Shop/Giant-Landover, which itself is a subsidiary of Netherlands-based Royal Ahold. In 2006, Giant signed a five-year agreement with Starbucks Coffee to open Starbucks locations in several of Giant's stores. The agreement was not renewed upon expiration in 2011 because many of the shopping centers that played host to Giant stores also were hosts of standalone Starbucks locations. Giant introduced a new logo on August 21, 2008, as part of a larger rebranding campaign; the logo is shared with Stop & Shop.

All content from Kiddle encyclopedia articles (including the article images and facts) can be freely used under Attribution-ShareAlike license, unless stated otherwise. Cite this article:
Giant-Landover Facts for Kids. Kiddle Encyclopedia.