Gilboa is a town in Schoharie County, New York, United States. The population was 1,215 at the 2000 census.

The Town of Gilboa is in the southern part of the county and is southwest of Albany. 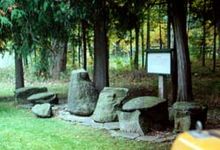 The Gilboa Fossils from the Wattieza tree located in Gilboa, New York discovered in 1920.

The town was first settled around 1760.

The Town of Gilboa was formed in 1848 from regions taken from the Towns of Blenheim and Broome. The name "Gilboa" is from Mount Gilboa, a biblical site in Israel, where King Saul's sons were killed by the Philistines, and Saul took his own life (1 Samuel 31:4)

A cotton mill in the community of Gilboa was a major contributor to the early economy of the town, but it was destroyed by a flood in 1869.

In 1926, the Schoharie Creek was dammed to form the Schoharie Reservoir. The original settlement of Gilboa was razed and flooded as part of this project. A new settlement was established north of the reservoir.

In 1870, workers blasting a site for a stone quarry found fossilized remains of tree stumps. In 2004, the tops and fronds of the trees were discovered and, in 2007, the fern-like trees, named Wattieza, were pronounced the oldest known trees on earth.

The south town line forms a border with Delaware County and Greene County.

The Schoharie Creek flows northward through the town.

There were 478 households, out of which 31.0% had children under the age of 18 living with them, 60.7% were married couples living together, 9.0% had a female householder with no husband present, and 25.7% were non-families. 20.3% of all households were made up of individuals, and 9.8% had someone living alone who was 65 years of age or older. The average household size was 2.54 and the average family size was 2.92.

Communities and locations in Gilboa

All content from Kiddle encyclopedia articles (including the article images and facts) can be freely used under Attribution-ShareAlike license, unless stated otherwise. Cite this article:
Gilboa, New York Facts for Kids. Kiddle Encyclopedia.